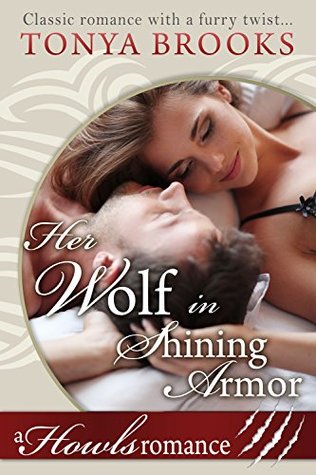 We first met Dane in Reece’s story, The Big Bad Wolf’s Ex, and at that time he was a compelling secondary character that I hoped would get to tell his own story one day.  That hay arrived with Her Wolf in Shining Armor.

I liked Dane and Shana together.  They met when both were at their lowest in the love department, yet as most shifters, Dane knew immediately that Shana was his fated mate.  Shana might be human, but she knew instant attraction when she felt it… and their connection was like nothing she’d ever experienced before.

Yes, there are several issues to be worked out between them.  Most were easily taken care of if they had only “talked to each other”… but then we wouldn’t have gotten the emotional, sexy and heart-stopping romance that we did.  They were a believable couple to me because, frankly, couples do these kind of things when they’re trying to protect the one they love “for their own good”… without asking.  The drama was a bit stronger because wolf shifters are involved but I not only liked their romance but found it plausible as well (for the genre).

We get to met up with Reece and Jolie again to see where their lives are now, as well as Shana’s friend Cindy.  I do wish that Cindy’s romance had its own book, for I would have liked to know this feisty loyal friend better.  There are a couple twists and turns later in this story that put a different spin on the ending.  Overall, I enjoyed my time in their world once again and would happily recommend both stories to any Paranormal Romance or Shifter Romance reader.  I had fun with this one – and isn’t that the whole point?