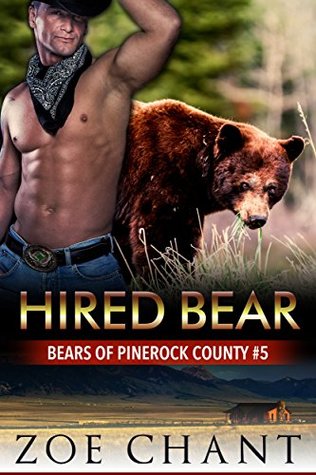 Crystal Martinez didn’t think anything could bring her back to rural Pinerock County, but if the family legend of a hidden treasure on her grandfather’s old farm is true, it could get her whole family out of debt. And she never suspected she’d want to stay, with her friends, her job, and her entire life back in the city. But that was before she met the red-hot rancher next door, with electric blue eyes and a body to die for. She doesn’t dare get attached (no matter what her betraying body thinks about his kisses) but she does need help if she’s going to find her family’s treasure before her time in Pinerock County runs out. It’s strictly a business arrangement … with a few fringe benefits … right?

Grizzly shifter Cody Hayes has watched his clan brothers find their mates, one by one. As the peacemaker in his rowdy clan, Cody has almost given up on finding love, until Crystal moves in next door. In one glance, Cody and his bear know this stubborn city girl with curves in all the right places is the mate they’ve been waiting for.

Even though she’s falling for both Cody and the rural beauty of her family’s old farm, Crystal is determined to make her time in Pinerock County short. As the search for her family’s lost treasure brings them together, Cody must show this commitment-shy city girl that Pinerock County is where she belongs—or risk losing the only treasure that matters to him!

It’s always a touch bittersweet when series I’ve enjoyed come to a close.  Yet Hired Bear is wrapping up the Bears of Pinerock County perfectly.

Cody has always been the easy going, peacemaker member of his tight bear clan.  There’s nowhere he’d rather be, but the truth is he’s the only remaining unmated bear – and he’s beginning to feel the drive to find his own mate.  He wants what he sees all around him… loving couples, kids, commitment and that deep feeling of being with exactly who you were made for.  He wants that, but first he  has to discover his mate and he’s not so sure that’s going to be easy.  In fact, Cody’s mate may be closer than he thinks and his own adventure into love is about to begin.

Crystal is hoping for a miracle at the end of this trip.  She’s inherited her grandfather’s old farm, one that she hasn’t visited since she was a toddler due to the fight between her father and grandfather.  Now the family legends of treasure buried here on the property is her last hope.  Her late father’s medical bills are bankrupting her mother, and finding treasure or selling this farm are the last hopes she has.  Trouble is as she spends time on the property it feels so much like home, far more than her tiny apartment back in the big city.  And one handsome, sexy neighbor is becoming far too important to her.  Sure, she can tell herself that they’re having a fun, sexy vacation fling – but she knows better.  She simply can’t see any other future for them except her return to the city.  But she should never underestimate the determination of a man in love or a bear who has found his mate.

Cody and Crystal were the perfect final couple for this series.  Both likable, determined and simply right for each other.  We have a few moments with the other couples we’ve come to know and enjoy.  And if there is a slight hint of something to come that might happen in the future, I’m going to keep my fingers crossed because that would be sweet… someday.  Just something fun that an alpha and a seer might know is possible, to one day learn if they were right.  I like possibilities left open, even if it wouldn’t be real soon I still have my book dreams.  *grin*

If you’ve followed the Bears of Pinerock County series, then Hired Bear is a story you’ll want to pick up.  I’d like to say it could be read on it’s own, and maybe it could, but you’d miss the inside knowledge of the other couple’s stories… and they are well worth reading.  I’d recommend this story and this series for any Paranormal Romance or Shifter Romance reader.  You’ll have a fun time.