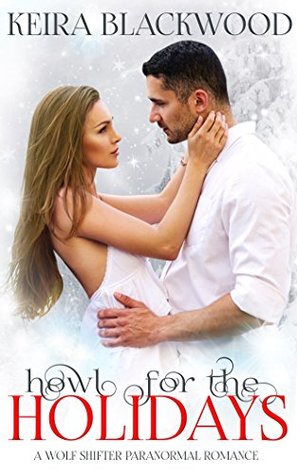 In the company of her pack, at work with the drunks, alone at her apartment—Amy Anderson wants to spend Christmas anywhere but home at her family’s farm. Time with her parents and grandmother, her sisters and their families, reminds Amy of what she wishes she had—a mate and cubs of her own. Too bad the man she wants doesn’t want her in return.

James Harkins has only ever loved one woman. He’s protected her, confided in her, yet kept her at arm’s length. But when Amy leaves town to visit her family for Christmas, he finds himself lost without her. After discovering her life may be in danger, there’s nothing Harkins won’t do to save Amy.

Amy and Harkins have been on the edges of everything that’s happened within the Sawtooth Peaks series.  They’ve fought side by side, run together in their wolf forms and become the best friend any person could ever want… what they haven’t done is acknowledge what they are to each other.  Mates.  Both suspect it, both want it, but neither will be the first to take that final step.  Harkins because he feels he’s too old for Amy, and too scarred by life’s events to make her a good husband or be a good father one day.  So he hides his love behind friendship and convinces himself that it’s enough.  Amy has loved Harkins for years, but the one time she pushed their friendship for a date, well she quickly learned that the friend zone was where he firmly had her in his mind.  She knew they could be happy together, but she’d rather keep his friendship, at least, than lose him completely by pushing too hard.  So, they drifted and remained the same.

It’s Christmas time once gain, and Amy is making her usual trek over the mountain passes to her family’s farm.  She’d rather be anywhere but on this road.  Oh, not because she didn’t like her family, she adored them.  But once again the questions would bombard her.  Got a man in your life?  When will I have more grand-babies?  And the feelings would pile on as well – envy, sadness and wishes that aren’t likely to come true.  So while she loves her family, being with them is at times painful, and full of the things she wants but most likely will never have.

Between the storm and her thoughts, Amy’s attention might not have been entirely focused on the road.  When an animal darts across her path, it doesn’t take much for her small car to spin out of control and over the embankment… then she remembered nothing.  When Harkins learns that Amy’s family is calling to see if she’s even left yet, almost twelve hours after she started on the trip home, he wastes no time in starting the search for the woman he  loves.

It’s often ironic that we truly don’t understand what we have or could have until we almost lose it.  Harkins search for Amy will find her, hurt but alive.  Now they must make the dangerous trip to safety.  Amy’s family farm is closer, but the way there is dangerous, and in the middle of a severe snowstorm there is more going against them right now than expected.  Two people who know they are right for each other will finally open up about their feelings, reveal some closely held secrets and take the steps that will give them a future together… but they have to get to safety first.

Amy and Harkins romance is a long time coming, oh stubborn people.  *grin*  It was a special Christmas gift to finally have them find a way to be together.  Harkins is a strong, stubborn man but eventually he has to admit that he really needs to make a life with the woman he loves, even if he’s scared about some things.  Amy will need to step forward and go after the man she loves, even if it seems he’s keeping her in the friend zone.

I loved the epilogue – and hope one day that we’ll return to Sawtooth Peaks for another set of stories… and find those last answers that Amy and Hawkins didn’t tell us.

I adored Howl For The Holidays and I’m convinced you will feel the same.  I would definitely recommend this one for a Christmas story and to finally have all our couples from Sawtooth Peaks live happily ever after.