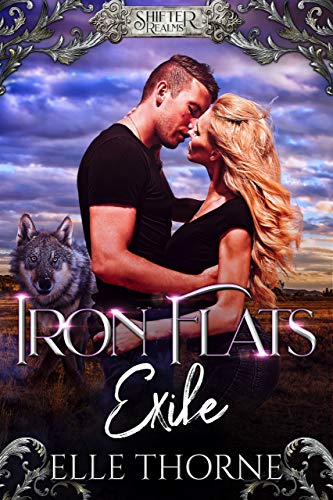 ‘Iron Flats Exile’ begins the ‘Shifter Realms‘ series (a brand new series, not part of the ‘Shifters Forever Worlds‘ connected series – which I love but it’s great to see another series take off, IMO).  Luke and Rachel’s story is short, but packed full of chemistry, danger, conflict, and begins to set up the world in which this new series will take place.  I definitely like what I’ve seen so far about the Crooked Arrow Pack, the surrounding areas, and I cannot wait to dive into more – which will be easy since the next two titles are already on my Kindle.

Most of what you’d need to know (or what I’d be willing to say in a review) can be found in the Cover Description.  What isn’t there is the emotional damage done to both Luke and Rachel, for far different reasons, that drive so much of their actions and reactions to each other.  We get Rachel’s reasons early on, yet the deeper reasons behind Luke’s actions come later and when they did I was gutted by the pain this man has been through to reach this place and discover his mate.

The true heroes of ‘Iron Flats Exile’ are a band of wild horses lead by one majestic stallion – they, and he, are as much of this story as our newly found lovers are and I enjoyed the horses’ interactions in this story very much.  There is an unknown danger, one that may continue (not sure but it feels like a possibility), sizzling smoldering chemistry, friendships reformed, a family reunited, and a brand new world to explore in this story – one I will be following until the very end for I’m most definitely hooked on the ‘Shifter Realms‘ series now.  If you love a good Shifter Romance, if you enjoy getting in at the beginning of a new series, if you love Elle Thorne’s work then you’ll want to pick up ‘Iron Flats Exile’ soon… like now.