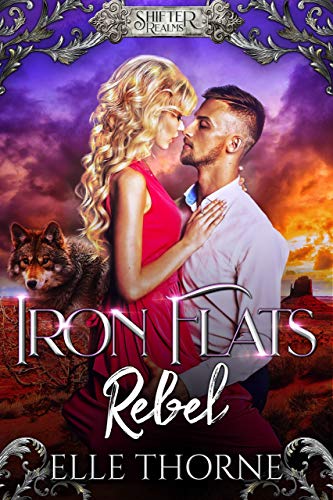 ‘Iron Flats Rebel’ is the third title in the ‘Shifter Realms‘ series and delivers a couple with their own issues to be dealt with while fighting an overpowering draw to each other.  While most of what you’d need to know before picking up Jared and Darby’s story can be found in the cover description, that doesn’t begin to give you the feel of desperation and determination that flows off of Darby as she finally makes a stand for her place in her father’s dysfunctional pack.  It might have been a harebrained idea egged on by a well-meaning best friend, but it was all she had before simply leaving for the human world and never looking back.  She had to at least try to gain her father’s acceptance, his love she knew she’d never have.

We’ve run into Jared, briefly, before but this time we’ll see how his own upbringing has shaped his firmly held beliefs that humans have no place in a pack, especially not mated to pack members – just like there were now two humans in the Crooked Arrow pack.  How that happened, he had no clue.  He only knew that humans might be good for a night’s enjoyment but never for a lifelong bond as a mate.  Jared was about to get his ill-formed opinions handed to him in a pretty package with a bow on top when he scents Darby in a local bar – never knowing that she was here to search for him specifically in order to put her own plan in motion.  Jared’s just met his mate, and his mate has no idea what is happening beyond a stronger than she expected pull towards this man she needs to betray in order to gain her father’s respect.

‘Iron Flats Rebel’ kept me engaged throughout as Jared and Darby faced their own inner demons, and fought truly falling for each other along the way.  Jared’s confusion about Darby makes perfect sense, yet his stubbornness to actually seeing what his senses, his wolf is telling him will come back to bite him eventually.  Darby had my sympathy and respect from the start.  Her life has been crap, and she’s doing what she feels she must yet the attraction to one wolf is overpowering.  And when secrets are revealed, under most unusual circumstances, she’ll have a choice to make.

Once again we get a bit more of Gabe.  I adore this gruff unknown and cannot wait to have his full story revealed.  A few more hints, a little more interaction this time only whets my appetite and curiosity that hopefully will be addressed in his own book one day.  One can hope and dream, right?

In all, I had such a good time back with the Crooked Arrow pack, and I’ve got the next one downloaded and ready to dive into this weekend.  Yep, totally addicted to this series.  And if you love a really good Shifter Romance with touches of even more paranormal, then you should be picking up this series for yourself.  I will always suggest starting from the beginning, but sometimes that’s not possible.  There are people and events that lead up to this story even though it is a completely this couple story that could stand on its own.  That choice is up to you.

I read this title when it was still in the Kindle Unlimited subscription.  Now, all of Ms. Thorne’s titles are available across all vendors so you should be able to find Darby and Jared’s story just about anywhere.