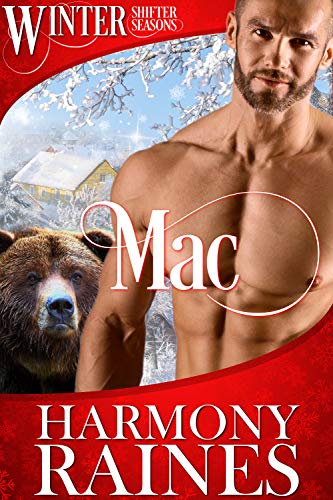 Bear shifter, Mac Winter, has spent his life supporting his family after his father died. He’s watched his brothers find their mates and couldn’t be happier for them.

That doesn’t stop Mac longing for a mate of his own. A woman to share his life with. To raise a family with and to grow old with.

When Saffron walks into his life, he knows instantly she’s the one. But his mate has secrets. She needs his help and he will do whatever it takes to keep her safe.

Mac Winter is everything Saffron wants and more. So much more. But giving in to the intense feelings she has for him isn’t possible. Not now. Not when she’s promised to care for her sister and her nephews.  Her sister who is fading away right before her eyes. Her sister who is dying of a broken heart.

However, when Mac reveals he is a shifter, she can’t deny herself, and fate, any longer.  And maybe Mac Winter holds the key to unlocking her sister’s broken heart and helping them all start a new life in Bear Creek.

‘Mac’ is the perfect wrap-up story for the ‘Winter – Shifter Seasons’ series (we’ll move on to the ‘Spring – Shifter Seasons’ with ‘Kelos’ next).  I’ve loved this family of bear shifters with three brothers staying together with their mother after their father’s death.  Mac stepped up as the eldest and held everything and everyone together – along with the expected brotherly teasing and tussling since he’s the oldest.  The sawmill has been a lifesaver for them and recently Mac’s brothers have found their mates and their happy ending.  He’s happy for them, of course, but longs for the day when he finds his mate as well.  That day has finally arrived and it’s going to be a bit complicated.

Yes, a little bit complicated when it comes to talking about Saffron since I don’t want to give away spoilers.  Saffron and her sister, along with her teen and pre-teen nephews have just moved to Bear Creek after her brother-in-law’s death (or his disappearance since they’ve never found a body).  Nina is broken-hearted over her husband’s fate and is fading fast.  She’s not totally convinced he’s dead which is why she insisted on moving to Bear Creek where he grew up.  What she hopes to find here is a puzzle to Saffron – one that meeting Mac will slowly be unraveled.

I had such a good time with Mac and Saffron.  Mac deserves all the happiness that Saffron brings him and more.  There are a few twists in this story but nothing that took away from two mates finding each other in the most unusual circumstances.  While the ‘Winter’ storyline may be wrapped up we still have the ‘Spring’ to look forward to with Kelos’ story starting us off – I’ve long wanted to know more about that dragon shifter.  I’ll be waiting for that release for certain.  If you love a good shifter tale then I’d definitely recommend this series – or any story within this world.