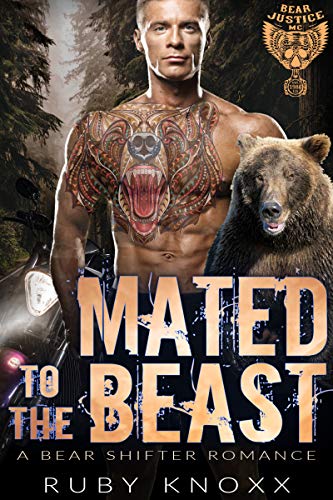 ‘Mated to the Beast‘ is the second title in the ‘Bear Justice MC‘ series, and what an action-packed, emotional ride it turned out to be.

The very last thing Rick expected to find when his crew was on a break near a Culture Pharmaceuticals facility in an area where shifters have been going missing was his mate.  He’d learned of the missing shifters from Arlo who was now living happily with his own mate but aside from passing the basic information along to others hadn’t yet actively done much more.  That was about to change when he scented his mate and followed that scent to the building she was entering… the very company that he’d been warned about.  Time to settle in, do some snooping, and met his mate face to face… even if his crew didn’t know what he was up to just yet.

Shae was on top of the world having just graduated, gotten her first job in her specialty, and that name tag with Dr. on it.  Add to that excitement was being able to do something good for shifters, to find medicines that could help them when human medicine did nothing, plus not having to hide her own shifting abilities.  She thought the samples she was studying came from a volunteer group – but that lie didn’t last long, especially when one very sexy, very determined biker came into her life.  Soon though trust will turn into anger, believing in the good of others will be stripped from her most cruelly, all the while trying to fight the bond she’s feeling with a man she’s no longer certain she can trust.  Emotions spiraling out of control, both Rick and Shae will make mistakes – hopefully not ones that cannot be fixed eventually.

‘Mated to the Beast‘ kept me flipping pages on my Kindle long after bedtime, but the loss of sleep was well worth it.  I actually love a story where I end up whisper-shouting to a character to ‘wise up’ or ‘don’t be so stupid’ or even ‘open your eyes and see the truth’.  Yeah, I often yell at the good stories, and I did a lot of that with Rick and Shaw.  The action is fast and furious, the sexy chemistry between Rick and Shaw off the charts, and the villains as vile as can be imagined.  I had a blast in this world, and I’m heading out to pick up ‘Broken Out by the Beast‘ now to continue this adventure.  If you love a really good, intense Shifter series then you’ll want to check out this one… right now.