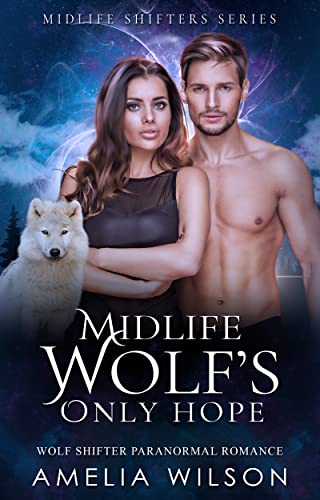 He’s a wolf shifter who’s lost all hope for his crumbling marriage. She’s a beautiful woman in desperate need of some hope.

My children.
My sister’s children.
I’m trying to raise them all alone, and I don’t think I’m doing a good job at all.
It feels to me like my world is falling apart.
And eventually, I’ll just crumble under the pressure.
When did I stop wanting to be happy and settle for wanting not to be overwhelmed?
And then…
And then another crisis with the kids appears like clockwork but brings with it the man of my dreams.

I absolutely adored Klarice and Valentine in Midlife Wolf’s Only Hope, their story is unique, definitely puts a different spin on shifters and their relationships, and delivers a heartfelt story that quickly captured my imagination and my heart.  Plus, this would be considered (by me) to be a seasoned romance and that just adds another layer of enjoyment.

I don’t like to give away too much of a story beyond what the cover description gives – but I think I have to touch on a few things, just a little bit to show why this one won my heart so easily.  Klarice is raising her own children and her deceased sister’s children as well.  Her husband was killed leaving her as the sole source of everything for all of these kids of varying ages.  The younger ones get up to the usual mischief, yet the teenager is going to find herself in hot water soon.  Valentine has known his marriage was over for some time now.  Oh, it’s not only knowing that his wife is having an affair but that the feelings just aren’t there anymore.  He’s trying to hold it together until their kids go off to college but one encounter with his neighbor, Klarice, is about to put a different spin on his world.

I loved the straightforward way that Valentine explained part of what was going on in his life to Klarice… but he’s still holding back on a secret that she and the kids will need to know before too much longer.  Their story is full of sexy moments, kids being kids, and some dangerous shenanigans going on as well.  Midlife Wolf’s Only Hope is a good story, told in an easy fashion, full of passion, love, and understanding.  I guess you could call it a “feel good” romance with just a touch of danger.  I had fun here and in the end, that’s all that matters.

If you love a solid story with a relatable plot, interesting characters, sizzling chemistry, and that little bit of danger, then you’ll love this one.