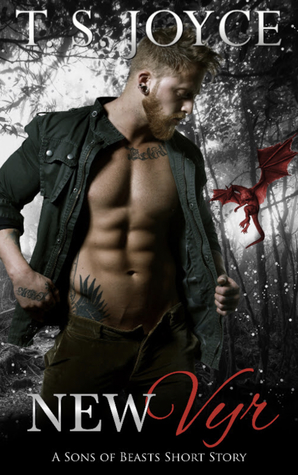 Vyr Daye is learning that not every happily ever after works in a straight line. He was supposed to be okay after he escaped shifter prison and found his mate, but for the past six months, his dragon has felt broken and has an undeniable instinct to burn and claim the entire world. Four mountain ranges in six months and he’s losing all control and dragging his Sons of Beasts Crew, and his mate Riyah, straight to hell. It was never the other dragons the world had to worry about. It was always the Red Dragon inside of him. And now he must find a way to save the world from himself.

Riyah Daye has been hurt and spiraling, and for months, she’s watched her mate do the same thing. But where she leaned on her Crew, Vyr distanced himself from everything he loved. She has a feeling she knows what’s going on, but she’s going to have to shake everything up to get the dragon’s attention…even if it means fighting fire with fire.

Sometimes a man doesn’t get the happily ever after he wants.
Sometimes he gets the one he needs.

Even among all the crews, the characters, the stories that create Damon’s Mountains universe there are still some characters who will forever stand out for me.  The men and women who come together in Sons of Beasts is such an individual series for me.  I will always cheer on, root for and back the underdogs, the misfits, the ones that have no one but others just as badly broken as themselves to call “crew”, “family”.  New Vyr is the final story in the Daughters of Beasts series, yet it is just as important as a final story for the Sons of Beasts as well for it is together that there will be healing for these two unique crews.

There had to be a reason why Vyr’s Red Dragon was so out of control.  As it stood, it wasn’t Kane’s dragon who was the End of Days, it was Vyr’s.  This story tells us, shows us why… and it is as heartbreaking as you can possibly imagine.  I won’t go into details for you deserve to experience this on your own… but there is one scene where tears were simply streaming down my face.  That’s a powerful story, one where I can care enough about characters on a page to cry real-life tears as though my heart is breaking.  That is the gift that T. S. Joyce gave us in New Vyr… the chance to know why and to feel so deeply.

I absolutely loved this combined story of the characters from Sons of Beasts and Daughters of Beasts.  If you’ve followed this series (or the entire universe) then New Vyr is a must read.  And to T. S. Joyce – thank you for letting Vyr speak to us and show us his heart.  What a helluva story.

We’ll also get a segway to the next series… and it fits so perfectly with this story and what we already know.  I’m definitely keeping my eyes open for release day.