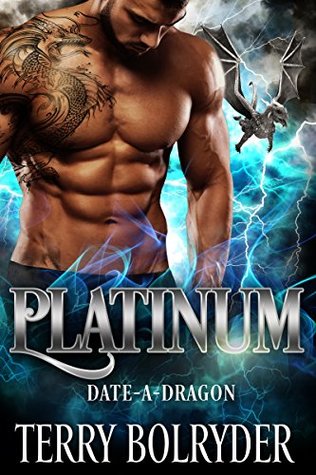 A Dragon as a pretend husband? Tempting…

Sever, the Platinum dragon, stood by as his friends found mates. With Gold and Silver gone, he’s left with only haunting memories of betrayal and a future uncertain as the sea. But when a woman writes Date-A-Dragon asking for help with a unique situation, Sever feels something awakening in him that was long dead. Perhaps he can protect someone once again. Perhaps he can at least be needed. But Sever doesn’t know that fate has something unexpected in store for the doubting dragon.

Lori Ridgeway’s life has been turned upside down in a matter of months. The death of a long-time friend has left her with a growing boy in need of a family and a small ranch in the middle of nowhere. To make things worse, the locals in her new town are more than a little hostile to a woman living alone. Her only hope lies in a mysterious man who agrees to help, storming into her life like something from a Viking fantasy, igniting her every desire.

Sever realizes almost immediately that his pretend wife is actually his true mate. Now he just has to figure out how to tell her he’s a dragon and she’s his. Meanwhile the tension between Lori and the locals is escalating, and unfriendly neighbors aren’t the most dangerous things hiding in the woods of Cate’s Creek.

Titles in the Date-A-Dragon series include:  Gold – Silver – Platinum –

I’ve been waiting for Sever’s story for a long time.  The Platinum dragon was hurt emotionally in a different way from some of his fellow dragons of long years past.  He is a dragon on the line between metal and precious or noble metal and it is a line he’s had to walk in his friendships as well.  Now with threats behind them and only himself and Citrine left unmated, although that crafty dragon was already on the hunt for his escaped mated… totally another story to come.  Sever was searching, longing for what his friends had and on many levels what he had hoped to find for himself in this modern world… his mate.  With all the chaos going on right now, the Date-A-Dragon offices being closed down it might have been easy to overlook Lori’s pleading for help letter.  Sever considered it more fate that he found her request, wrote back and they had agreed upon a “job” for him to do to help her out on her ranch.  He has a feeling about this… time will tell if he’s right.

There is so much going on beneath the surface in Lori and Sever’s romance.  Yes, she is his mate and the misunderstandings between dragon and human, let alone two people from totally different centuries are certain to happen.  There is also the mystery of why the townsfolk want Lori and her young charge, Taylor out of town.  This isn’t a polite “we don’t like your tie” this is down right harassment and fire starting.  There certainly are many layers to Platinum, and I enjoyed every single moment spent in this world.  There is certainly more to Taylor’s story, especially since Pride Island was mentioned numerous times.  We may have gotten a glimpse of the future, only time will tell.

All of our loved characters stories aren’t quite completely wrapped up, yet I have enjoyed these connected sets of series very much.  I always enjoy Terry Bolryder’s work, and with her dragons she’s given us quite a treat.  I would not hesitate to recommend Platinum or any of the other dragon’s stories.  Fun banter, sexy times, a good solid story and touches of mysteries yet to be solved.  Can’t ask for much more than all that.