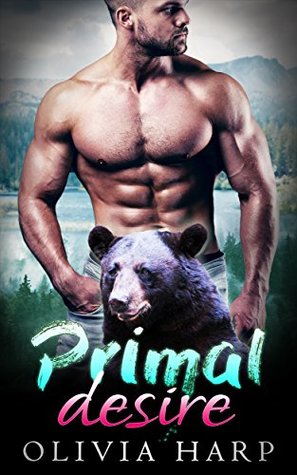 Coming from a ghetto in Los Angeles, Audrey Rodriguez knows exactly what she needs to do to turn Jefferson High into the best school in the country. She might be a tough principal, but that’s exactly what the school needs. She has no time for BS, and definitely no time for love.

But what is it about the school’s counselor? Yeah, he’s built like a tank and deliciously handsome, but she should know better than to get involved with someone at work. She has to stay as far away from him as possible… but the way he looks at her, as if he already owns her, makes her tremble.

After discovering his darkest secret, she’ll have to come face to face with the consequences. Even if it means surrendering herself to him.

Enzo Gallagher is a channeler. A shifter who bends the forces of nature to his will.

His bear is wild and brutal, constantly fighting him for control. Through the years, he’s kept it in check by being cool headed, composed. But the school’s new principal turns everything upside down. Her sexy curves, her take-no-prisoners attitude… it’s more than he can resist, and his bear wants her.

But claiming her will put her in the sights of an ancient evil, one that wants nothing but her destruction. Will he tame his inner beast, or succumb to his desire?

If you’ve been following the Shadowlands Bear Shifters from the beginning, or since, you’ll finally see Enzo get a happy ending… eventually.  For now the Rot seems to have been defeated, the HQ is full of mates and kids and life moves onward.  Enzo is now a counselor at the local high school.  He likes giving back, helping kids that have faced poverty, abuse, bullying, gangs and just general teenage angst.  He’s had a pretty good success rate, the kids trust him and he makes a difference in lives.  With a new principal coming on board Enzo isn’t exactly sure what to expect as he’s been asked to clear out his office with no where to move it to… so far.  But he remains optimistic, if he’d been fired he’d know by now, right?

Audrey knew that her friends thought she was crazy for taking on this job.  But she liked a challenge, and this high school would probably be quite the challenge if the outside was any indication.  She welcomed the work though, it gave her purpose and she helped, in some ways, to change lives for the better.  What more could she ask of her job?  Little did she know then that she’d find her destiny inside that building, and be a reminder to never underestimate evil for it never truly goes away.

Enzo and Audrey have a spark between them right from the beginning.  They’ll dance around each other, cite professional reasons they shouldn’t… but eventually the should feels so right.  Enzo’s bear is shouting mate, but he’s holding back.  Until Audrey is willing to go beyond hiding what they share the’s not going to take the next step.

When she does discover what Enzo is and can do, Audrey doesn’t run, but she’s still fighting telling the world about them.  One slight healing of a bad injury will make such a difference for everyone.  Danger, action and consequences will result and a lesson is well learned.  Never say never.

I enjoyed Primal Desire, it’s funny in spots, sexy in others, full of action, surprises and a few quick appearances by the previous couples in this series.  I had fun with it – and if this is the last story, then it’s been an amazing ride, one that I enjoyed.  I’d highly recommend this story and this series to any Paranormal Romance or Shifter Romance reader.