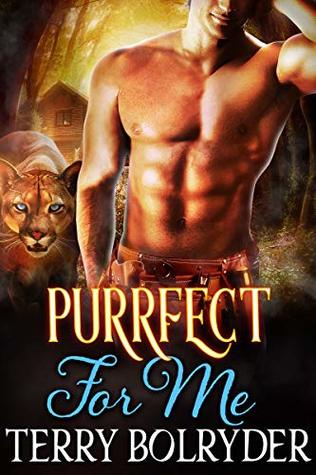 Hunter Raines thinks it might just be time to pick up stakes and head out. With his friends happily mated, the cougar inside is getting restless. That is, until a mysterious woman wanders into the bar one night, with more secrets than answers and a body that makes his animal sit up and take notice.

Kelly Anderson is tired of running. And her move out to the nowhere town of Silver Lake is her last, desperate attempt at peace. But when a man with piercing blue eyes and golden hair butts into her life, offering to repair her old cabin that he insists is a deathtrap for next-to-nothing, Kelly realizes that maybe a little good can come from even her crappy situation.

Hunter is as unrelenting as his namesake, both inside the bedroom and out. But Kelly doesn’t know how long she can keep her secret from the man that she knows she’s falling for. And even if he knew, what could a single man do against the creature that’s following her?

But there’s more to Hunter than meets the eye, and the possessive cougar will stop at nothing to protect his mate.

Purrfect For Me brings the Built Fur Love series to a close… yeah, I’m sad but also excited to find out what Terry Bolryder has for us next.

I’ve been looking forward to Hunter’s story from the start.  Anyone as sleek, and sexy as that cougar deserves the best in a mate… and he’s found her.  But something else found her as well for Kelly is running from a stalker, one that absolutely no one will believe.  She’s moved practically across country to escape this stalker, but will it be far enough.

As Garrett and Grayson have found their mates and are settling down, Hunter starts to feel the need to move on.  He’d never planned to put down roots and their friendship is already more like a family – and truth be told watching them with their mates, Hunter’s feeling a bit wishful as he wouldn’t really mind having what they have.  He never expected to find her, but his cat certainly sat up and took notice when Kelly walked into the bar, looking for food before making the trip out to her distant, rather rundown cabin.  It doesn’t take long before protecting Kelly, and stopping her stalker is Hunter’s top priority – but Kelly hasn’t told him everything yet.  He’s up against something he’s familiar with, but not normally acting like this guy.

You cannot help but feel empathy for Kelly.  She’s facing something that is totally unbelievable, but she knows what she’s seen.  Trusting Hunter with not only her past but her heart as well is not going to be easy.  But he’s not running, so maybe she’s finally found what she’s been looking for.  I loved Kelly and Hunter together, their banter is funny, sexy and keeps you on your toes around them.  Kelly easily slips into Hunter’s family as if she’s been with them all forever.  I have to be careful in what I say, but watching Kelly finally see and accept what Hunter also is was a heart swooning moment.  The girl’s got guts and heart and she’s perfect for this cougar.

The series (or trilogy) had to come to an end, I knew this… but Purrfect For Me was indeed the perfect way to send these amazing shifters and their mates off into their future.