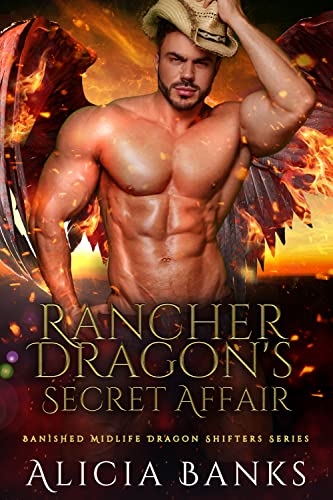 Danielle is just trying to get her career going by working at a big law firm, and she wants to do it without sleeping her way to the top, much to the aggravation of the senior partner. But when her family ranch is in danger of unwanted development, her boss is the only one who can help. So why is she so drawn to Logan, the super-hot cowboy who operates the competition ranch? And why does she enjoy him pursuing her when they’re forbidden to associate?

Logan Hale
I’ve enjoyed my freedom and bachelorhood, for years, and even the word relationship made me cringe. I run the ranch with my family, see whoever I want, and walk away with no strings attached. But then I met her, the daughter of our biggest competitor, the one mother specifically told us all to avoid. But I can’t get her out of my mind and I would love to get her into my bed. The stiff she has hanging around needs to get lost, and he seems to have some ulterior motive.

Whatever it is, it won’t work – She’s mine, and she’ll realize that before long. I claim what’s meant to be, and that’s her.

Danielle Thomas
All I wanted to do was my job as an associate attorney. Only a year out of law school, I needed to prove my stripes. But Malcolm, the senior partner of the firm, wants to go out. And everyone will think I slept my way to the top. His advances are annoying, and I do whatever I can to discourage him. Then my dad calls, and the family ranch is in danger of a new highway. And, of course, Malcolm is the only one who can help.

Then I get my eyes on Logan, sexy, amazing, the cowboy won’t get out of my head. Why does his family have to be my own family’s top competition? His own mother forbade him from seeing me. But we haven’t listened. At all. Thank God. Malcolm needs to hurry up with the legalities because I’m falling hard for the cowboy with the perfect body. But why is Malcolm so fascinated with Logan?

Can there be something about Malcolm that Danielle never figured out at the office? What exactly is he into? And can Logan and Danielle keep their passion a secret long enough to figure out what’s going on? Or will it boil over until they can’t resist temptation?

Rancher Dragon’s Secret Affair is the third story in the Banished Midlife Dragon Shifters series.  Everything you’d want to know about Danielle’s and Logan’s story before picking it up can be found in the cover description.  What you won’t know is how emotional their story really is, on several levels.

Danny is human, she has no idea that dragons live among the mountains or that they are much closer than she could have ever imagined.  She’s focused on her career, on moving up the ranks at the law firm… and avoiding, at all costs, one persistent man in a position to ruin her entire career with a single word.  Unfortunately for Danny, she’s about to pull Malcolm into her personal space when she learns that her family ranch is being endangered by the state claiming eminent domain over a large portion of their property to put in a highway connection.  When she feels the legalities are above what she can handle at this early part of her career she asks Malcolm for help.  Mistake, big mistake.

Logan is a dragon shifter whose family has been banished from their original home and is now surviving by ranching on the mountain… or catering to those who want a ranch experience ticked off of their bucket list.  He’s footloose and fancy-free, not ready to settle down at all.  Until he runs into Danny, his human mate and everything Logan could have dreamed about his future is turned upside down mostly because he’s been fiercely forbidden to have any contact with Danny by his mother, the matriarch of their family.  But Danny is in trouble, her family ranch (his family’s competitors) is in real danger, and no dragon worth its fire would ever walk away from their mate willingly.  Not to mention that Danny really wants nothing to do with Logan for she is tunnel-visioned and focused on her career far away from the mountains.  And… there’s just something about her boss that feels completely wrong and protecting his mate, even if she won’t acknowledge that, is his top priority.

I enjoyed returning to the Banished Midlife Dragon Shifters series with Rancher Dragon’s Secret Affair.  The villain everyone is facing is vile beyond redemption.  The danger is very real.  And Danny’s stubbornness will cause more than a few tense moments for Logan.  I adored Logan, this charming dragon who has to walk a thin line between angering his mother but needing to be with his mate, to safeguard her against an enemy she’s not seeing.  I wish I could say the same for Danny.  I liked her, but she seems blind to what isn’t her own opinion or idea, and she will not acknowledge that a little help might be needed.  But, we love who we love so Danny was Logan’s mate – I accept that she’s perfect for him and that’s all that matters.

If you’ve followed the series so far then without saying too much we will get a hint as to Sarah’s eventual story… and I’m so looking forward to that.  In all, I had fun back in this world, with a good story, sizzling chemistry, vile villain, and complex families.  Hard to ask for much more than all that.