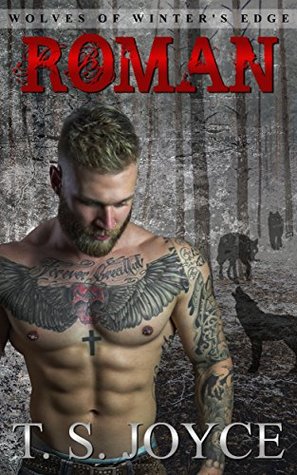 Roman Striker is on the hunt. His brothers may have big plans to save his hometown, but all Roman cares about is ridding the world of one vengeful alpha of the Bone-Ripper Pack, Rhett. Getting to Rhett is easy—mess with a submissive she-wolf in his pack named Mila and the alpha makes mistakes. But Roman and Mila grew up together and their history runs deep. And the more Roman gets to know the woman she’s grown into, the more he wants to pull her away from the pack for different reasons. She’s got his protective instincts at maximum, and he sure likes the way she looks at him, but he’s got dark secrets nobody knows about. The kind that could burn a sweet beauty like her.

Mila is just trying to make it from day to day at the bottom of a notoriously monstrous pack, but when Roman Striker blows into the bar she works at offering her a shot at a better life, hope starts to bloom inside her for the first time in years. If anyone can turn this messed up town around, it’s Roman, but he doesn’t realize his potential. And as she gets to know the Wolves of Winter’s Edge, she wishes for a life she could’ve had if Roman hadn’t left all those years ago. Her alpha has destroyed everything, and now Roman is showing signs of a darkness she doesn’t understand. As a war brews between the two clashing packs, she’ll have to pick a side…even if choosing a side means living with dire consequences.

I’ve thought long and hard on how to talk about Roman without giving away spoilers… and it’s not going to be easy, because there is a lot happening in this second story in the Wolves of Winter’s Edge story.  So I think I’m just going to give you my reaction to the story and let the Cover Description give you the tidbits on this amazing Shifter romance and the new world that T. S. Joyce is introducing us to.

Roman and Mila, at first, give the impression of completely mismatched lovers.  But there are depths and strengths to them that they will only discover as they let the bond that has always been there grow and develop into so much more.  While I found Roman to be a fascinating, sexy and pretty much all around great character, it was Mila who touched me the most.  As a submissive wolf, she starts life fighting for everything, being at the bottom of the ladder has become natural to her.  Under a caring Alpha she blossomed but never met her full potential.  Under the tyranny of a cruel and evil Alpha that Rhett certainly is, Mila is in the worst situation of her life with no options but to follow commands, even when she knows how wrong they are.  Under the gentle, and at times frank guide of Roman’s plans and feelings for her, Mila will find her bravery, strengths she never imagined she had within her.  Finally understanding why Roman left so many years ago has changed her reactions to her life.  When she has something precious to fight for Mila becomes so much more than she, or anyone else, ever could have imagined.  She has power, she simply didn’t know how to use it.

There are twists, and secrets revealed in Roman that put a different spin on what we already know.  And there is certainly more to come in Asher’s story.  I have no idea how long this series will run, or if, once again, there will be connecting series to come… I certainly hope that is the plan.  Yet the world that Ms Joyce is building is fascinating, vibrant and darker than her other worlds.  The darkness may lift, I am assuming, to some degree – but the edginess of this world is  part of its charm.  You quite frankly never know what will appear next… and that grabs your attention and keeps it focused on the characters.  I have hope for the town of Rngeley, and also hope for more stories to emerge from this world.

Roman will get its claws into the reader, not to damage but to hold us firmly in place while the story unfolds.  I absolutely love this new series, the characters are deep, dark with sparks of light which promises that not only the situation but they themselves will be changed by the resolution for this town.  I’d highly recommend Roman for any Shifter or Paranormal Romance reader.  You will be captured – and that’s a really good thing.