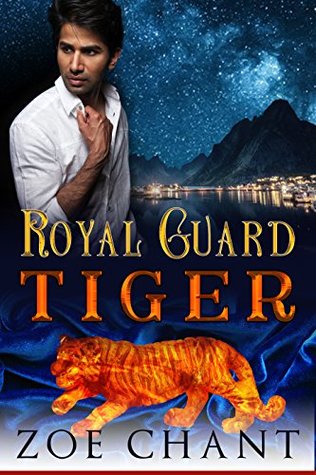 Tiger shifter Tristan of the Royal Guard of Valtyra has been sent out on a mission to find Miss Poppy Zlotsky, sister of Valtyra’s new Crown Princess. The mission would be challenging enough if it were only a matter of finding the footloose Poppy, but he’s also been told to lure her back to Valtyra without spilling too many secrets about shifters, magic, and her sister’s newfound royal status. On top of all of that, as soon as he meets Poppy he realizes that she’s his mate. He just has to woo her before all those secrets come out and scare her away…

Poppy Zlotsky has been wandering the world for more than a year, but she’s starting to get tired of the endless traveling–and even more tired of being alone. When a tall, dark, mysterious stranger helps her out of a tight spot, Poppy is swept off her feet and into a world of magic and intrigue. But she’s hiding a few explosive secrets of her own …

Tristan and Poppy are drawn to each other from the moment they meet, but their secrets could tear them apart. Will Poppy learn to trust her mysterious stranger, and can Tristan learn to open his heart to his mate?

I’m really torn on Royal Guard Tiger.  That’s not a place I’m accustomed to being with a Zoe Chant story.  On one side is an intriguing plot with some mystical moments, and possible future happenings that captured my attention.  I do want to know more about the  Guardians, their role and how they function for the people of this country.  And yet… I could not connect with the main characters.  I don’t doubt their passion, their love for each other.  I simply didn’t make enough of a connection to really be invested in the outcome of their romance.  I don’t like when that happens, especially with an author that I absolutely love the majority of her work.  But it happens, sometimes stories just don’t mesh with a reader and this time it was this story for me.

It’s been mentioned that Royal Guard Tiger could be read without first reading Royal Guard Lion.  I would disagree.  I believe the reader needs the background story of Signy and Kai to understand some parts of Tristan and Poppy’s journey.  That’s my opinioin, but I do believe this is a series that for the most enjoyment and understanding should be read in order.

I will definitely continue following this series.  And yes, I recommend this story to other Shifter Romance readers and those who enjoy Zoe Chant’s work.  It’s a good story, the fact that I didn’t connect with the main couple is on me not the author.