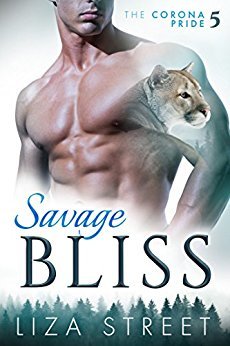 Throughout The Corona Pride series we’ve had glimpses of Viviana.  Always in the background, never standing out from the rest of the pride, and it feels almost as if she’s not really part of the pride that she’l be alpha to one day.  Viviana has been isolated from the pride in many ways, her formidable mother’s actions really – but,like the rest of her pride, a move that Viviana hasn’t really fought Marlana about either.  She escapes her loneliness, and sleepless nights with midnight runs in their territory becoming familiar with the land that is in her blood.  Yet a new threat from a rogue vampire, one with a vicious vendetta against the Corona Pride will change lives – and perhaps bring Viviana into her own strengths as a future alpha.

Seth is a human who has lived among a wolf shifter pack since his mom mated with a shifter.  That amazing man adopted him and their lives were good until Clay’s death.  Then his mother began a downward spiral into grief and depression to the point where she no longer spoke or acknowledged her surroundings.  Now Seth is taking his mother to a special care facility near the territory of the Corona Pride.  There he hopes she’ll get the help she needs – but he needs work.  Bodyguard to a mountain lion shifter?   Sure, he could do that – it paid good and was near his mom.  It started off as a job and quickly grew into so much more – as a human he wasn’t looking for the fated mate thing – but he couldn’t deny the draw he has toward Viviana..

I don’t know that I can adequately express the emotion of seeing Viviana come into her own strengths, her confidence in herself and the wisdom, already being shown, that she will bring to the Corona Pride one day as their alpha.  Where we once saw an almost beaten down young woman, alone and kept from any friendships within her pride, we now see a strong woman able to stand up to her mother, make the choice of who is the right man to be at her side and accept the challenges that await her.  If it’s possible to feel proud of a character, then I’m certainly proud of who Viviana became.

There are series that when they end I sit back and think – yeah, that was good.  Then there are those that are more difficult to say farewell to, the ones that feel more like saying goodbye to friends than fictional characters.  That is my feeling today.  I suspect this is the final story, and if it is we leave the Corona Pride in very capable hands.  But I have to admit – I’m going to miss them.  But who knows what the future holds, maybe one day we’ll meet again.

If you love Shifter Romance then this is a series I would highly recommend.  Believable characters, realistic (for the genre) situations to face and secondary characters that get their own stories told over time.  I loved Savage Bliss.  I am extremely lucky to have discovered The Corona Pride series.  And if there is more – fantastic.  If not, then I’m looking forward to what Ms Street brings to us next.  I’m pretty sure it will be amazing.