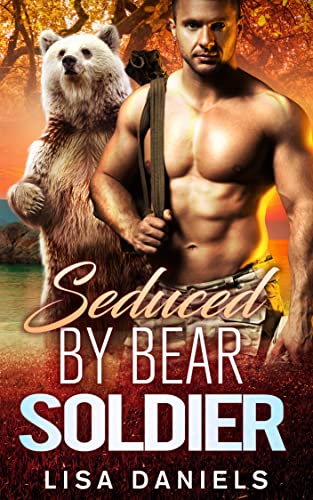 He left without a word and became a soldier.

I was so broken-hearted I didn’t think I could ever love again.
It was as if I was reborn as a completely different person without my strong, silent shifter lover.

After nearly a decade of pointless flings and long hours at work, I thought I was ready for him to come back into my life.

Then I lost a patient, and all of the pain from the days when he left washed over me.
I’m not ready. I’m not ready to see my mate. My love.

I ran from it, hiding even from my family.
Then I encountered another shifter, and everything changed.

Now I might lose him all over again.
I want to curse him for making me care.
But he will always be my hot bear shifter, the love of my life. I can’t lose him again.

Seduced by a Bear Soldier is the fourth title in the Bear Heroes of New York series and brings us Stella Ott’s story.  From the time she was a young girl, Stella knew that Dalton was her mate, her one and only… but no one else believed her either teasing or tormenting her about her feelings for her brother’s best friend.  Time moves on and the family dynamics change and now Stella and Dalton have declared their feelings for each other – although they’ve kept that knowledge to themselves not sharing with her family.  Something that will come back to bite later in their complex love life.  Then their happy interlude imploded when Sawyer, Stella’s big brother returned from combat a changed man, and Dalton was sent in to replace him.  Trouble was that Dalton did that “for her own good” thing that guys (especially shifter guys) seem to do so often and so annoyingly when he left without a word.  To say that Stella was hurt and angry as a hornet would be an understatement.

Years later Stella is a doctor with a unique to her power, one that can help others but leave her shaken and overwhelmed with emotion.  She’s just lost a patient… and told that Dalton was home.  She couldn’t cope with both events, she didn’t want to see or think about the man she loved still so Stella did what she always does when things get to be too much in life – she ran, went into hiding, and made things even worse.

I enjoyed Seduced by a Bear Soldier even though I wasn’t particularly fond of either of the main characters.  Yes, it is possible to like the story but not the people living it.  There’s a lot going on in the background of this story which you’ll discover firsthand.  Couples from the earlier story in the series make appearances as their lives move along as well.  Stella is a strong, stubborn woman / bear shifter, perhaps too stubborn for her own good.  And I think I’ll leave it at that.  Seduced by a Bear Soldier is entertaining, engaging, and passionate and will keep you flipping pages to see how this couple can ever get their happy ending.  I believe each reader should make up their own mind about Stella and her actions – I’m not about to spoil anything with my opinion of her.