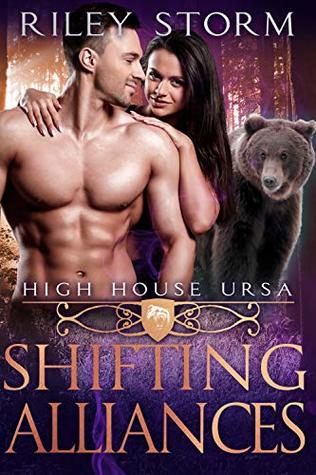 The intensity of SHIFTING ALLIANCES is off the chart.  While Amber has no true idea of the power she holds within, a power that often escapes with disastrous results, there are those who do understand and either want her dead or controlled.  Kasperi and the Asps have been charged with routing out the magic users and this trail leads directly to a woman cowering in the snow almost waiting for death to overtake her.  He almost gives her that gift when he hesitates for there is more here, he feels it and instinctively knows that she needs to learn to control her powers instead of allowing them to overtake and control her.  The fact that Amber is Kasperi’s mate, even though he has no idea how to tell her weighs heavily on his actions and his decisions – some that don’t have the best results.

I enjoyed this story overall, it brings us along further into the intrigue of the High Court, discovering who the traitor truly is (or at least thought to be the only remaining one – time will tell), and Kasperi won my heart early on.  I wish I could have liked Amber, but I didn’t, and by the end of the book I was still only tolerating her as my hero’s mate.  It happens some times where I just cannot click with a character no matter how I try.  Going deeper into my reasons would only further my own reasoning and perhaps slant you towards her in a way you might not otherwise feel.  So, I’ll simply say that Kasperi and Amber are sizzling hot, there are conflicts for them to face, and a murderous traitor to bring to justice.  There are some twists that I didn’t see coming until they were upon me, and that’s the way I like it.

I have so many stories to get caught up on in this world, but that’s a project for 2020.  If you love an intense magical, shifter romance that will keep you on your toes throughout then you’ll love SHIFTING ALLIANCES.  I would definitely recommend this one, and as always, you should be the final judge on the story and the characters.