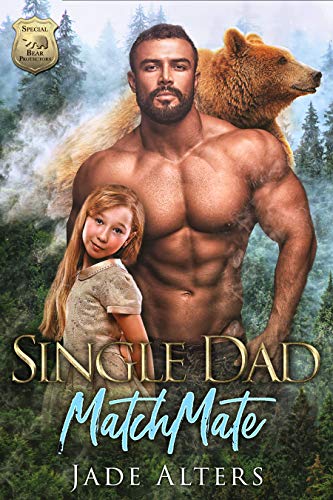 ‘Single Dad Matchmate‘ is an intriguing romance between a bear shifter, Luke, and a human, Victoria – although the heat is high, and the chemistry sizzling these two are holding back vital information which could end what is beginning to look like a perfect match.

Luke has been doing just fine as a single dad, he’s got a full workload, tons of interfering family around, and two great kids who are his world… beyond that just isn’t important.  Until his kids ask for a mom.  Yeah, not something you just go shopping for, right?  But with a meeting with a matchmaker Luke’s future just might have hit a bright spot – unless his family and those secrets destroy everything.

Victoria is a successful web designer, yet in the personal parts of her life, she’s batting zero.  She wants an alpha man, and she’s not finding him in New York City.  After one final disastrous first date, Victoria resorts to a matchmaker and is given a bit of a surprise when her match sends her back home, and perhaps an entirely new phase of her life.

‘Single Dad Matchmate‘ is full of sizzling chemistry, a dangerous situation, a family that might mean well but only gets in the way, and two people who are hiding important parts of themselves as they are falling in love.  Luke’s family, particularly his mother and sister were the least liked people I met in this story – in fact, their actions infuriated me so much that there were times when the Kindle was in danger of being tossed across the room.

I liked Luke and Victoria individually and as a couple, yet the information they were both holding back from the other was vital to any budding romance and especially one involving blackmail, hackers, shifters, and secrets that should have seen the light of day long before they were.  I understood their reasons, but not Luke’s family’s actions.  I adored the kids, they are the brightest spot of this story.

There is conflict, danger, and sizzling attraction in ‘Single Dad Matchmate‘ and it all comes together as one story that will draw you in and keep you there until the ending.