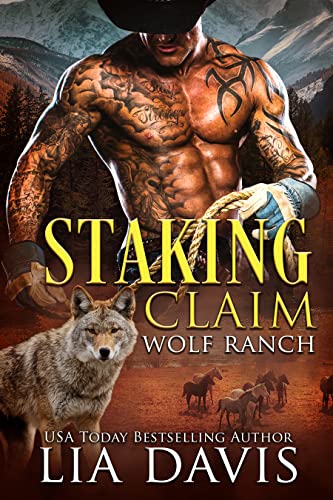 On the run from his past and hoping for a fresh start, lone wolf Noah Ramos takes a job as the Kelmount Ranch manager only to discover that the Alpha’s sister, sweet and sassy Bailey, is his fated mate.

Bailey Kelmount is hesitant to get involved with a new hire whose shadowy past is as mysterious as he is handsome. But the guiding hand of fate is irresistible, and Bailey has no choice but to slowly give Noah a chance.

As Noah and Bailey’s love blossoms, the power of their mutual attraction begins to burn hot. But Noah’s past isn’t as far behind him, and it isn’t long before his ex-girlfriend arrives at the ranch, determined to win him back. Ruthless and cunning, she’ll stop at nothing to get rid of Bailey and reclaim Noah for herself, even if it means putting the entire ranch in danger.

With lives and love on the line, Noah must free himself from his ex’s deadly scheme and unite with Bailey once and for all. Can he convince his fated mate that theirs is a love worth fighting for?

Titles in the Wolf Ranch series include — Reconcilable Claim —♥— Protecting His Claim —♥— Staking Claim —♥— Family Claim —♥—
This is an adult 18+ story that contains language, possible violence, and/or sexual situations geared to an adult audience.
Booksprout ARC

Bailey has taken over as manager of the family ranch until a permanent manager can be found – she certainly didn’t expect this new manager candidate to be her mate or to run from him at first sight.  She has very little trust in lone wolves, especially after the murder of her father.  And Noah is definitely a lone, packless wolf.  She’s running scared, but fate (and her family) has other plans for this woman who needs to trust in herself and in her mate before they can find their happy ending.

Staking Claim continues the Wolf Ranch series with a couple who certainly were not expecting to find their mate at this time – and aren’t dealing with that fact very well.  Oh, the attraction is off the charts, but the fear is as well.  Noah is well, not running, but definitely constantly moving around from an issue in his past, one that will spell danger for his future mate.  He just didn’t expect to find her but now things are coming to a head and the past will not stay tucked away any longer.

I adored Bailey, she has just enough fire and vulnerability to reach out and grab my emotions.  Noah is completely perfect for Bailey (and this family) but his past has to be faced… and what an amazing showdown that was.

If you love a well-written, intriguing, sexy Shifter Romance with a believable cast and enough heat mixed with sweetness to satisfy any reader then Staking Claim is perfect for you.