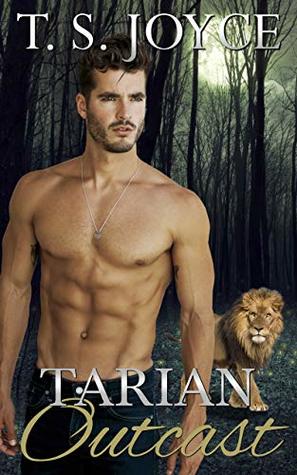 Katy Craigson is on the run. Not from anything too scary, because she is a safe girl and doesn’t do danger, but she’s running from a past that keeps trying to drag her under. All she needs is a week with her best friend in the mountains of Colorado for a week. But when an unlikely hero comes to her rescue, she’s sent on a path she never saw coming. For some reason, she can’t stop thinking about Kannon, the sexy, quick-witted lion shifter. He’s explained that humans have no place around the Tarian Pride, but her heart isn’t listening. She’d almost given up on men, but he’s showing her just how good a man, or shifter, can be. The old Katy would’ve run from the danger that immerses his life, but the new Katy is up for a little adventure.

Human Katy has Kannon Killian’s full attention. That’s not good for her. The Tarians have a strict law against humans near the Pride. Humans are too breakable around these violent big cat shifters. Kannon’s lion is on the hunt though and pushing him to do unspeakable things to keep the pretty girl who can make him laugh on a dime. And too bad he’s not the only one hunting her. Three lion shifters have an interest in Human Katy and for all drastically different reasons. She has no idea how much danger she’s in, and it’s entirely his fault. He should’ve never dragged her into the chaos of his life…but then again…he never really had a choice. The animal inside of him has chosen a girl who is too fragile for his Pride of war lions. Or is she?

One of the many reasons I follow anything that T. S. Joyce writes is her ability to create quirky, completely believable offbeat characters that you cannot help but love.  Katy is a perfect example.  She’s been kicked down in one of the worst ways but she’s attempting to get her life back on track.  She’s clumsy, can fall over the shadow of a crack in the sidewalk or a tied shoelace with equal lack of grace.  She has no filter on her thoughts whatsoever, what Katy thinks she usually says with varying reactions from those around her.  She’s a survivor who’s learned to keep her head down but can’t hide her inner klutz to save her life.  I adored her… and so did Kannon.

TARIAN OUTCAST brings us an intense romance between the human Katy and lion shifter Kannon – a union that is frowned upon by Kannon’s pride for although they may have formed the New Tarian Pride, many still believe in the old ways… and that includes no humans on pride land or in a pride member’s life.  But what happens when a lion shifter finds his mate in a human?  Well, things get interesting and an unusual solution is found.

I loved watching the interactions between Kannon and Katy.  They fit so well together, they balance each other and that was a pure joy to experience.  There is renewed danger in TARIAN OUTCAST as a former enemy who was thought dead resurfaces to cause chaos.  We get to catch up a bit with the pride members and learn a little bit more about one particular lioness who surprises herself with her bravery and her actions.  I had a blast, as I always do, and if you love a really good Shifter Romance then you’ll want to check out not only this story but the entire series.