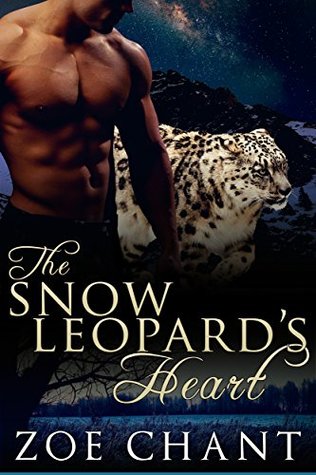 Sometimes stories simply tear you apart emotionally, and I admit that’s what The Snow Leopard’s Heart did to me.  I’ve read and loved the entire Glacier Snow Leopards series so far, but I think this one hit a bit deeper because of the people involved.  Oh, there is no doubt that several characters in this series have been to hell and back, and survived with their mates.  Nina and Joel have more than surface troubles, they have deeply ingrained mental anguish to add to how the world has treated them.  Joel has always been angry at this parents’ fated love.  When his mother took sick, they lived in the city with no shifter medical care available to them.  At her death he blamed fate and the thought of fated mates for bringing on the pain and suffering she endured.  And he vows to never, ever fall for a woman who is his so called mate for he will not tie someone to him through pheromones and need.  Nina was rejected by her adoptive parents when she had her first shift.  Called a monster by her father, he kicked her out of her home at seventeen to survive or perish in the world without his protection.  Since then Nina has been traveling around the country, searching out small towns near woods in the hope of finding a pack that would accept her.  She’s lonely, tired, and a bit afraid while holding onto her stubbornness and determination to survive.  She believes she’s found the perfect place to settle down, if possible.  The Glacier National Park’s grounds offer such beauty and the chance to run free as well as sheltering her for the moment.  She’s hoping to find a pack – what she discovered was a mate… one who would not allow their bond to flourish.

We will meet up with all the previous couples again as they help, in their own ways, Nina to deal with how Joel is acting about their bond.  Some harsh realities, some rethinking how to react to life and the love that is behind the mate bond will eventually allow Nina and Joel to find their happiness.  But it will be a battle to get to that point.  I enjoyed their story so much and would recommend it for any Paranormal Romance or Shifter Romance reader.  This one is full of emotions, comfortable friends and facing one’s deepest fears.