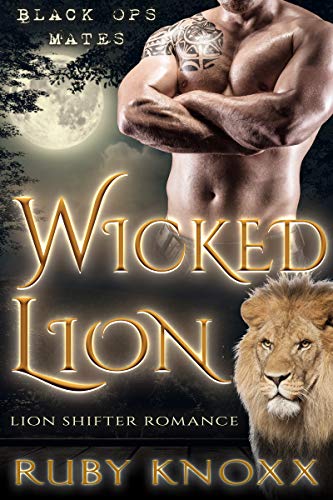 I’m known for turning down plenty of women.

I’m picky about who I let have my time.
But she’s a woman I can’t turn down.
“No” is not in my vocabulary when she’s around.

She’s the complete opposite of me.
My wilderness only comes out when I shift.
Her wilderness comes out in different places.
Places that I want to explore with her.

I know it’s a bad idea to find a mate.
I don’t need that constant worry about someone I care about.
But my lion is purring inside of me.
And I know what that means.

I’m going to break out all the stops.

Wicked Lion is the second title in the Black Ops Mates series and it quickly grabbed my attention with a compelling storyline along with two equally stubborn people who are meant for each other… eventually, when they get their act together.

We briefly met Reina and Maxen in Natalie and Jonas’ story, Wild Lion.  Now, Reina is making a pretty huge career decision and while giving up parts of the former job don’t bother her at all, the pay, well she’s become accustomed to her lifestyle but finding another high paying job that she actually qualifies for isn’t as easy as she’d thought it would be.  Imagine her surprise when she walks out of the unemployment center one day directly into the path of a woman waiting for her who had the absolutely perfect job for Reina.  When something seems too good to be true you should really listen to that gut instinct… Reina didn’t.

Maxen knew of Reina only as Natalie’s friend, yet when they casually run into each other and Reina has cause to celebrate it doesn’t take much convincing for them to have a celebration brunch.  Maxen’s lion kept sending him comments throughout their time with Reina, for some silly reason the lion seems to believe that they’ve found their mate.  Of course, Maxen isn’t buying that, he has too much freedom to take a mate, his work as special ops means everything to him and he’d have to give that up when his mate comes along… so no, she cannot be his mate.  Except, well, even big, strong, stubborn military men can be wrong… and he’s about to find out the hard way just how wrong he was.

I enjoyed Wicked Lion very much.  It doesn’t take long to realize that Grace isn’t what she appears to be.  The readers know that something is off from her sudden appearance, her prying questions, and trying to wiggle her way into Reina’s life far too quickly for a boss.  But Reina is too caught up in her new job and the new romance with Maxen to pay attention to the details that don’t add up.  Maxen’s hesitation in accepting that this lovely lady is indeed his mate will lead to complications and danger for them both.  I loved Reina she’s sassy, funny, and isn’t afraid to say exactly what’s on her mind.  Maxen is the type of hero that I adore, hot, sexy, and just a bit clueless about what he’s feeling because that mate or love idea is just a bit beyond what he wants to accept at first.

The villain is vile, the danger is real, the sizzling chemistry is off the charts, and the story held me captive throughout.  If you enjoy a fast-paced Shifter Romance with touches of danger and intrigue then the Black Ops Mates series, and Wicked Lion would be perfect for you.