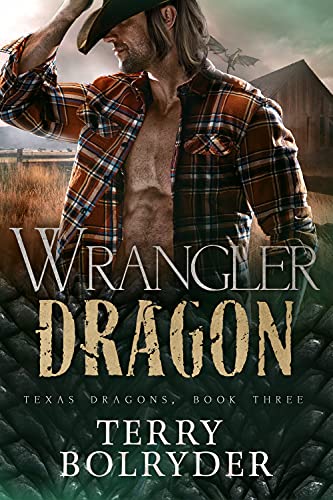 Save a horse, ride a wrangler dragon…

Clancy, head wrangler for the notorious Dragonclaw Ranch, never thought he’d have a mate. After all, swamp dragons like him are infamous for being monstrous killers. But as badly as he wants to keep his past behind him, an unexpected encounter with a curvy store owner puts him face to face with his complex history. In spite of that, her strong personality and cute reactions to him immediately make the beast inside Clancy growl “mate”.

Billie Palmer has finally gotten her hands on the dragon’s talon coin that belonged to Clancy long ago. So when a tall, sexy man comes into her store hoping to take the precious antique off her hands, her answer is no. Even if he has eyes the colors of emeralds and a body that she can’t stop thinking about.

But a brush with danger brings Clancy rushing to Billie’s aid. And the nearer he gets to Billie, the more possessive his dragon is becoming. Clancy can’t stop wanting to hold and protect her, and Billie can’t stop the feeling that she’s fast falling for the mysterious man. Together, they experience exciting adventures by day that turn into unforgettable pleasures at night. But something is coming for them both. And if they don’t learn to overcome the demons from their past, nothing will be able to stop the savage creature intent on destroying everything they both care about.

Wrangler Dragon is the third title in the Texas Dragons series — and wow!  I have to admit that I haven’t chuckled this much over a clueless, stubborn dragon in a long, long time.

Clancy never thought he’d see his talon coin again, yet here it was right on display for the world to see.  The coin represented his past, what he once was, how he’d acted back then in an effort to survive.  A past he wasn’t proud of but he still stood here today, so many years later, alive and determined to purchase that talon coin and put his past right back where it belonged.  Unfortunately, the feisty woman who now owned the coin wasn’t the least bit interested in selling – no, she was more interested in immortalizing a gun-slinging outlaw and a past that Clancy fears he will never outrun.

So, what’s a world-weary, ancient dragon to do?  Perhaps offer a trade for something she’d want even more.  Trouble is, Billie might want to hear all his “old” stories about an ancestor, but that so-called ancestor’s dragon kept insisting that they’d finally found their mate.  And she was in some serious trouble right now thanks to that coin.

I had an absolute blast with Wrangler Dragon.  Billie is adorable in her hero-worshipping of the man Clancy once was, but watching this strong, stubborn woman begin to fall in love with the present, with the same man right in front of her right now was such fun.  Clancy might be a smart, ancient swamp dragon but when faced with a stubborn, sexy mate he’s facing something he’s never had to before… his own emotions and his fated mate.

The danger they’ll face will have you on edge as we learn more of what is coming for them.  I love how Terry Bolryder can always toss a surprise into a story at just the right moment, it’s one of the reasons she’s a go-to author for a good Shifter Romance story.  I enjoyed being back in this world, can see how it’s probably going to grow… and I can’t wait for that.  If you love a good Shifter Romance full of laughter, danger, and sizzling sexiness then you’ll love Wrangler Dragon.