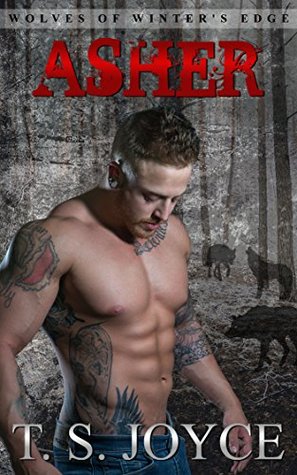 Asher Striker is full of dark secrets. His brothers think he’s quiet because he’s moody, but Asher had to learn at a young age that if he doesn’t focus on controlling the power within him, he could destroy everything and everyone around him. All he needs to do is help Gentry and Roman open up Winter’s Edge, and then go back to his solitary life. It would be safest for everyone that way. But when a mouthy, funny, beautiful woman shows up at his inn, Asher begins to rethink where his life should be headed. Ashlyn makes him want things he can’t have. She’s wrecking his focus, but little by little, she’s also breaking down his walls and easing the darkness within him. And now he has to decide whether her fixing him is a good thing, or something that will get them all killed.

Ashlyn Jenkins has a bone to pick with her best friend, Blaire. She’s on a mission to save her from the three obvious psychopaths she lives with now. Sure, the Striker brothers are hot, especially the oldest, Asher, but Ashlyn’s duty is to her friend, first and foremost. That is, until she realizes Blaire is very different from the way she used to be. Now, the more time Ashlyn spends with Asher, the more she wants to unravel the mysteries around him and the life Blaire has built for herself. And when she witnesses the darkness that dwells inside of the quiet, silver-eyed, growly giant, she thinks she might just be able to save him. But Fate has plans for her and Asher that will change the course of not only their lives, but also the town of Rangeley forever.

If you’ve been following the Wolves of Winter’s Edge series then you now know that the end is in sight with Asher’s story.  The last story in a series or trilogy is always bittersweet.  I fell in absolute deep love with Gentry, Roman and Asher.  The depth of their characters, the way this trilogy has magically come alive has been one of the most enjoyable Shifter journeys I’ve been on yet… and that’s saying a lot.

I’m going to forgo my usual light recap of parts of the story type of review this time.  Not because there isn’t a lot to talk about – but I am afraid I’ll say too much.  This story explodes with action, magic, danger, love, friendship and so many questions answered… and a few twists that I probably should have seen coming, but I didn’t.

Ashlyn is exactly what Asher needs in his life, but never expected to find or pursue.  There is so much that Ashlyn doesn’t know about her best friend, and her efforts to “rescue” her will, of course, go nowhere.  You’ll feel different things for Ashlyn throughout the story – she is vastly changed from the innocent, determined girl who first arrived in Rangeley into a confident, powerful mate by the story’s end.  We get a deeper understanding of Asher’s true powers that have only been hinted at up til now.  As well as the terrible loneliness and burdens he’s had to carry for so many years.  Ashlyn is changing him into something so much more than he ever dreamed possible.

Asher is a powerful, intriguing and even compelling conclusion to an amazing trilogy.  I sincerely hope that we will once again return to Rangeley and meet up with the Wolves of Winter’s Edge again soon.  There are still so many possibilities that I hope will find their way into more tales to enjoy.