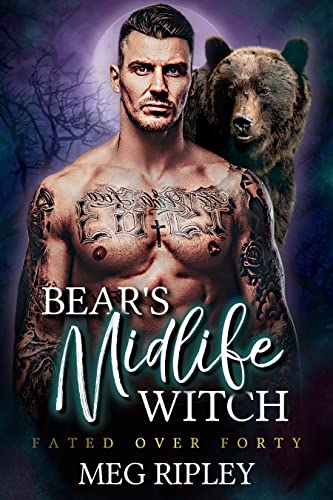 Widowed witch. Mother of two half-breed teenagers.  And that’s just the beginning of my midlife crisis.

In one of his drunken stupors, my husband got into a fight and plunged off a bridge, leaving me to raise our two children on my own.

Fourteen years later, my son’s struggling to control his magic, but I’m too busy keeping a roof over our heads to train him alone.  When he accidentally sets his bully’s locker on fire, it’s time to move in with my crazy old Aunt Lenora down in Carlton.  I land a waitressing gig at a brewery in town, and when I meet the head chef, his deep green eyes have me spellbound.

He may be a single parent like me, but with his bad boy looks and mischievous smile, I know he’ll be nothing but trouble— Especially when I hear he’s a bear shifter, just like my dead husband.

His unusual name sounds strangely familiar, though.  Intuition tells me to pull the police report for my late husband’s case, but it burst into flames in my hands when I saw the name of the suspect: the same one that belongs to the man I can’t resist.

Bear’s Midlife Witch is the eighth story in the Shifter Nation: Fated Over Forty series and delivers an intriguing, and tense romance with a few unexpected twists along the way.

Shannon has returned to Carlton to live with her aunt in the hopes of helping her son get his magic under control.  She’s a witch with unusually strong abilities, however, she’s also let her magic just sit there mostly unused as she goes about life raising two children on her own after her husband’s death.  With a teenage son whose magic isn’t exactly stable and a teenage daughter who loves to annoy her younger brother with her own abilities, well, life is hectic enough without tossing a romance into the mix.

Drew is handling fatherhood on his own and is very protective of his daughter.  So, he sticks with creating delicious meals as a chef and leaves the romance for the other folks to worry about since he has enough on his plate right now.  But that notion goes out the window when Shannon begins working at the brewery and the attraction is instant.  Yet, she’s a witch and he’s a bear shifter both with kids… no way this is ever going to work, right?

I had fun with Bear’s Midlife Witch.  The story is solid, exactly what I expect from this author, and those curveballs, well, that just made Shannon and Drew’s journey all the more interesting.  I love the little glimpses of the town, the food trucks, and some of the folks we met in earlier books.  Those kinds of details matter to me, just as secondary characters that can stand on their own always make a story more interesting to me.  There were moments when I would have loved to have a stern conversation with Shannon and Drew, but they had to discover some things the hard way – like not always believing the worst before you know all the facts.

If you love a good, solid Shifter Romance with sizzling chemistry, shenanigans galore, twists and turns to the story, and characters that leap off the page then you’ll love Bear’s Midlife Witch and feel right at home in this series.