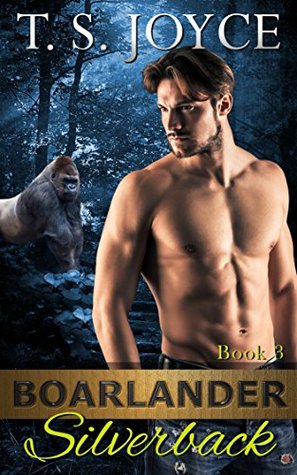 Alison Holman has been assigned to enforce the new laws around Damon’s mountains, but a chance meeting in the woods with rip-roaring, chest-beating, musclebound gorilla shifter, Kirk Slater, and she’s questioning everything. The Boarlanders aren’t what she thought, and the more Kirk shows her his world, the more the line between humans and shifters is blurred. But as she falls head over heels for her man, a war is brewing that she is unwittingly a part of. She’ll have to let her heart decide where her loyalties lie, because suddenly, the job she was sent here to do doesn’t make sense anymore. And one of those illegal claiming marks from the man she loves is becoming mighty tempting.

Kirk Slater is a logger by trade and a fully mature silverback shifter ready to make some big life decisions. He has everything figured out until he meets Alison, the beautiful undercover cop with a tough, tatted up exterior and a serious soft side that has his gorilla roaring to be with her. Too bad she’s arrived right in the middle of a storm brewing over his crew. Now Kirk has to figure out if he can trust her and fast…because the biggest threat to Damon’s mountains might just be the woman who has stolen his heart.

I wasn’t completely sure how I was going to feel about Kirk given his history with another of my beloved silverbacks, Kong.  But I gave him the chance to work his shifter magic on me, and I was very glad that I gave him that second chance.  We’ve met Alison before, and at that time I felt she would make a good mate for one of this crew for she fits right in with their personalities and back stories in so many ways.

The attraction that Alison and Kirk are feeling is happening at probably the worst time for there is new danger from an old foe brewing.  And not everything is as it appears in Damon’s Mountains.  Be prepared for a few twists, which always come at exactly the right time.  I have such affection for all of these crews, so when people from earlier in this journey show up to lend a hand during a crisis moment I’m always grateful for a few moments with old friends.

Alison and Kirk work.  She is so much more than she first appears, her story is just as broken in many ways as the other members of this crew.  She probably needs this crew as much as they, and Kirk, need her on their side.

I would highly recommend Boarlander Silverback for any Paranormal Romance or Shifter Romance reader.  You’ll find an interesting couple, sexy moments, a thrilling plot and secondary characters to truly care about… hard to ask for much more from a series.