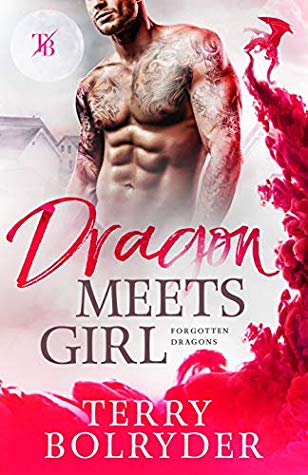 DRAGON MEETS GIRL is the sizzling, enticing second story in the Forgotten Dragons series.  I am loving these twins and their mates, and I truly hope that this turns into a longer series – or at least, the lead-in to a series where we get answers to questions introduced in Xander’s and Janet’s story.  This Cover Description really gives you all you’d need to decide to pick up this story, this series.  What it doesn’t say (and it says a lot) is the emotional roller-coaster ride you’ll be taking with this couple.  While I’ll always recommend reading a series in order (when possible), I really believe you need to have read DRAGON NEXT DOOR to get the closeness of these twins and what they’ve gone through in life to understand why Xander often acts as he does.

Janet has her reasons for keeping Xander at arm’s length for so long.  Reasons that can be overcome, yet she’s very reluctant to show any weakness to any man.  Xander has a player’s attitude but not a player’s lifestyle.  He’s a lonely dragon, never believing he’ll find his mate – even when he sees Tristan and Kelsie’s happiness together.  His outgoing nature is a cover for the loneliness in his soul, but that changes when he meets Janet.  Now his sole purpose is to protect his mate (whether she wants that protection or not) and to convince her that his feelings for her are very real, a lifelong commitment that she can trust in.

The steaminess level of the Forgotten Dragons series has notched up a few levels, and I’m loving it,  These twins put the sexy in loving your mate to a new hot burn level.

There are people introduced in DRAGON MEETS GIRL that I’m now intensely curious about.  A villain we haven’t seen before, a possible organization to watch out for, and a dragon, Taylor, who I hope gets his story told very soon for he deserves a happy ending as well.  And that’s as far as I’m willing to go, to find out more you’ll need to discover this series on your own – which I highly recommend.  I had a blast with these couples and if you love a really good Shifter Romance then you’ll want to jump on board real soon.