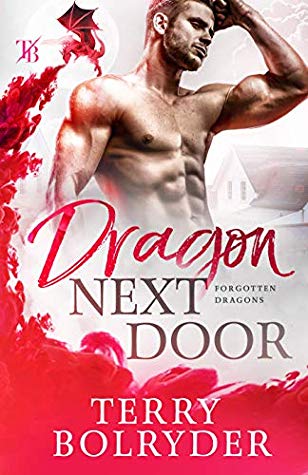 I always love returning to Terry Bolryder’s dragon worlds, and even if the connection is light or implied, she makes each dragon series unique and DRAGON NEXT DOOR, the first story in the Forgotten Dragons series is no exception to that rule.

Tristan and Kelsie meet when Kelsie has gone to the rescue, reluctantly, of two people being harassed by bad guys.  She never expected help to appear in the form of a sunglass-wearing hulk using grocery bags as a weapon.  Yeah, I kid you not.  So we begin with a new series of two brothers, twin dragon shifters, who were abandoned by their parents at a very young age and left to die… but they survived, and view the world, the shifter world, with jaded eyes always trying to remain invisible, hidden from those they believe would bring them harm.  Kelsie will bring Tristan into the world, to take a few risks as their intense attraction for each other plays out.  Danger will eventually find them yet neither will let their love go as they fight to remain together for a lifetime.

I loved the banter between Tristain and Kelsie, and with Xander as well.  They certainly do keep things hot, steamy and sizzling.  DRAGON NEXT DOOR is a fun, intriguing, sexy, enjoyable adventure into a world full of dragons, hidden paintings, a reclusive artist, an oracle and a whole lot of banter and bonding.  I had such a good time in this world – and DRAGON MEETS GIRL is out so I’m gonna go binge read a bit.  If you love a really good Shifter Romance tale, then you’ll want to get started on the Forgotten Dragons series, like now.