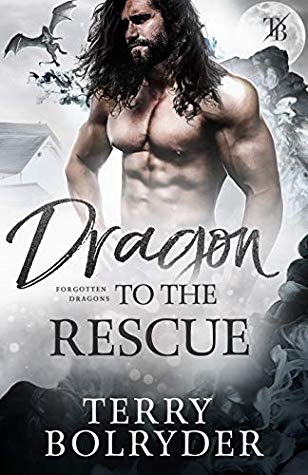 There are characters who will capture my imagination, my “reader’s heart” very quickly – and I cannot give you a logical reason why.  I simply know when it happens, kind of like the real chemistry between two people, sometimes from the first meeting I know a character is going to give me the story, the ride, the adventure I crave… and that character this time was Taylor.  What this man has gone through is beyond heartbreaking, and I had no idea of the depth that reading his story would bring to my caring about this dragon shifter.

DRAGON TO THE RESCUE will be in the top five favorites from Terry Bolryder for a very long time.  And while I’d love to tell you all about the quiet, powerful man and the woman who he never believed existed for him – well, I’m frankly afraid that I’ll end up telling you their story and that is something you should discover for yourself.

Mindy is a wonderful character, a giving woman who really doesn’t give herself enough credit for her work, her abilities.  Together she and Taylor shine as they discover a unique bond between them, and eventually face dangers neither could have ever imagined.  I loved bringing all the dragons and their mates together again for the epic conclusion of this story and this series.  I am fascinated as to where we’ll be going after the reveals in DRAGON TO THE RESCUE.   That is definitely something to look forward to.  I loved Taylor and Mindy together and would not hesitate to recommend their story to any reader who loves an intense romance, steamy, sizzling chemistry, very real danger and a love that was meant to be.  I was captured and didn’t want their story to end.