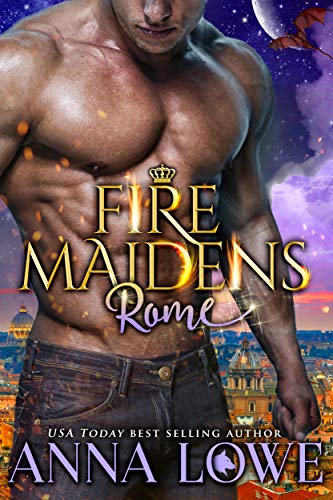 The one woman this lone wolf can’t resist…

New Yorker Lena Castamolino has trouble. Big trouble. Every time the full moon shines, her body tries to turn into a wild beast, and she has no idea why. Her skin goes all leathery, and her shoulders begin the agonizing transformation into wings. Wings! Could it have to do with her recent move to Rome — a magical city that called to her for years? Or does the answer lie in the father who abandoned her at birth? Either way, she needs help, because all the grit and determination in the world can’t stop the moon — or the evil forces hot on her trail.

Rome may be known as the Eternal City, but eternal banishment is more like it for members of the despised Monseratti clan. But wolf shifter Sergio Monseratti has been granted one last chance to return to the city he loves, and he’s not about to blow it. “All” he has to do is bring down a ruthless mafia boss, and he can’t afford any distractions now. And he absolutely, positively cannot fall in love with the mysterious woman who could be the key to saving the city, no matter how high the passion between them builds.

Dazzling starlets, billionaire playboys, vengeful enemies, power-hungry dragons, secret heirs… It’s impossible to know who to trust, but one thing is for sure — destiny is on the move, and Rome is its stage.

Fire Maidens: Rome is the third title in the Fire Maidens / Billionaires & Bodyguards series – and Sergio and Lena’s story has a few unique qualities to it that immediately captured my imagination.

If you’ve followed the series so far then you’ll recognize Sergio’s last name.  It’s interesting to see him get a chance at redemption for his family’s actions and perhaps find his own place in this city he loves so much.  Lena is starting over in Rome, a fresh start for a woman who is beginning to experience odd sensations, burning pain from wings that couldn’t possibly exist, an inner voice speaking to her to let go and trust in her other self, and a drawing to a stranger’s voice even as she runs from him and what she is.  So Lena begins this Rome adventure with an idea of what she is but is refusing to entertain the possibility for she has no idea that shifters exist – until she proved to be one.

The action is fast-paced, the sizzle between Lena and Sergio hot enough to burn, mixed in with vile villains, unexpected allies in high places, and a secondary character cast that I adored.  Fire Maidens: Rome was everything I’d hoped it would be… and more.  I absolutely loved the epilogue, so fitting for this unique Fire Maiden and her mate.  Now on to Marco’s story which is certain to break my heart before healing it up once again… that’s what these characters have always done for me.

Available in paperback, audio, and for the Kindle