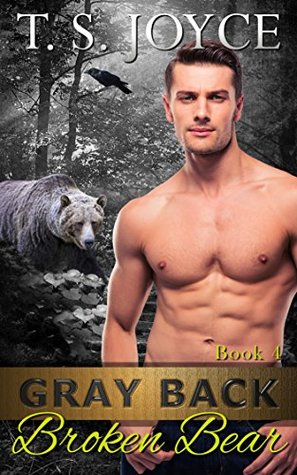 From the beginning of the Gray Back Bears series we’ve known that Easton is an out of control Shifter.  He is barely holding on to his sanity and his need to fight constantly is taking a huge toll on him and his crew.  At some point soon his Alpha will have no choice but to put him down.  Time is truly running out for Easton – and he knows it.  Living in a trailer separate from his crew, Easton knows the depth of loneliness and despair.  He has moments of great kindness, times when he can function among his friends, his crew – but for the most part he has now become almost completely Beaston.  A man, a bear out of control, dangerous to not only others but to himself as well.  At this point he believes there is nothing that could possibly save him or if he even wants to be saved.

Aviana has lived her life in fear.  Her people, raven shifters, are a totally reclusive group of shifters who are terrified of and violently hate every other type of shifter species… especially bears.  Yet, as children Aviana had first found Easton in his bear form, deep in the woods abandoned and starving.  In her raven form she tried to help him, food and tiny items to lift his spirits were left where he could easily find them.  When it was discovered that she was helping a bear shifter, even a child, her parents put a halt to her activities.  Now years later and facing an arranged marriage that she does not want, Aviana is taking her courage firmly in hand and seeking out Easton once again.  There was something between them, she simply knew that, but would Easton remember her or even want to know her once he realized that she could have done so much more for him in their childhood but was stopped by her clan’s fear and prejudices.

Gray Back Broken Bear was such an anticipated story, and one that was both difficult and uplifting to read.  We (the readers) knew that something horrible had to have happened to Easton for him to be in such dire straits at this time in his life.  I don’t know that we were prepared for the cruelty and indifference, and pain that were the true benchmarks of his younger life – and how that affected his life became quite obvious.  My heart broke for this man.

The romance with Aviana is full of parts of pain and happiness, hope and disillusion but finally it’s about a love, a bond that is unbreakable.  And a love that will mend one man, one woman into a untied couple who can face anything… together.

I had waited on pins and needles for Easton’s story – Ms Joyce certainly delivered a heartfelt story so deep, so poignant that emotions ran high as I read this one.  If I could this story would get 10 stars – and be worth every single one.