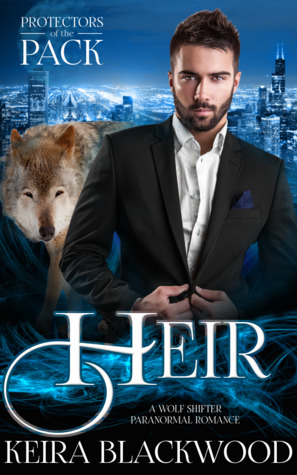 Titles in this series include:  Bodyguard – Enemies – Heir

I’m always a little sad to leave old friends behind when a series comes to a conclusion.  The Protectors of the Pack is no exception, but what a way to end this series.  Satisfying.  Intense.  And a lot of enjoyable moments with Grace and Hunter.

The rein of the Silent Butchers is ended.  Their leader is dead and the last survivors of the gang have scattered to the far winds without someone to hold them together.  Good riddance and may they burn in Hell.  The lingering problem is that the Silent Butchers didn’t just show up to cause trouble and wreck mayhem on their own dime, they were hired to create the chaos and cause death to anyone in their path.  It has become vital to discover exactly who hired them, until that person is stopped the Briggs family and empire are still endangered.

Grace fled her small town in search of freedom and to escape the mate her parents sold her to like a slab of meat.  No.  Not happening.  She’s talented with numbers and is hired into the Briggs empire.  A she wolf who doesn’t shift often, Grace was hoping to be around only humans but one sniff on her first day on the job proved that to be unlikely.  Ah well, she’d just keep her head down and nose to the books – it was a job, the key to freedom and she wasn’t giving it up any time soon.  Her fascination and talent with numbers uncovered a major scandal and brought her to the attention of the head of the company who had another task for her only… to try to track who exactly hired the Silent Butchers.  She answered to only one man, and when that man is injured and incapacitated she’s left to give her findings to… who.  Who can she trust now?  Because what she knows is huge and could bring down a person in a very high place.

Hunter is the heir apparent to his father’s empire and the future Alpha of the largest wolf pack in the states.  He’s learning the ins and outs of the company and showing his abilities – but unfortunately, he doesn’t know every aspect of what his father is up to and that will prove dangerous.  He’s noticed that his father is looking ill, off in some way that he can’t put his finger on exactly.  But when his father collapses during a meeting everything will change in an instant – and not only his father’s life but the company, the pack and Hunter are at risk as well.

Heir brings the Protectors of the Pack series to a compelling close.  And it does it in a way that is packed with danger from unknown enemies, false accusations, mates who find each other at the most inconvenient time and humor.  Yes, humor.  I cannot think of a heroine that I’ve met recently who made me laugh or shake my head with a smile as much as Grace does.  She has absolutely no filter.  She babbles when nervous, and she’s nervous a lot in this story.  Some of the things that come out of her mouth are so… delightful in the  midst of chaos that you simply have to laugh.  Never at her, but at the things she thinks and manages to share out loud in awkward moments.  She is priceless, and Grace was the hero, in my mind, of this wrap up of an enjoyable, satisfying series.

Hunter is a strong personality in an underscored kind of way.  He has no need to flash his power around yet the force of his personality is obvious.  His world had been turned upside down as his father is attacked and near death, his mate is charming, cute and totally doesn’t trust him as far as she could toss him… and she just might try.  There is an enemy close, within the company who is out to frame him, kill his family and take over the company.  That is so not happening on his watch.

As Hunter and Grace rush to not only save Hunter’s father but themselves as well, they will have to deal with puzzles, attraction, and learn to trust each other quickly.  They are their only hope, if they don’t have each other’s backs the enemy will win.  And watching the timid she wolf finally roar was absolutely delightful.

I would highly recommend Heir and the Protectors of the Pack series to any reader who loves strong characters, believable situations and likes ta bit of humor along with the sexy times.  I would also strongly suggest that this series be read in order for continuity and to get the most out of each story.

So it’s time to say a fond farewell and happy life to my story friends.  Now comes the wait to see what Keira Blackwood brings our way next.  Personally, I can’t wait to meet the next set of characters now living in her imagination.