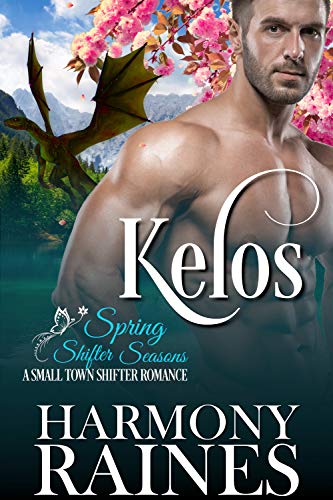 His mate is on the run. His dragon will do whatever it takes to protect her…

Will their love survive?

Dragon shifter, Kelos, has lived a solitary life. When he finally decides to settle down in Bear Creek the last thing he expects is to find his true mate. After all, he’s waited centuries for her.

It’s love, and lust, at first sight. But Kelos needs to keep his emotions in check until the danger surrounding his mate is dealt with.  Who is he trying to fool? There’s no way this dragon shifter can deny his feelings for his mate. Which means he has to deal with the people threatening his mate’s family now.  Would breathing dragon-fire over their foe or perhaps biting their head off be overkill? Unfortunately, those days are way in the past and they have to play by the rules of the modern world. Pity.

A phone call from her brother sends Amber on the run with her sister-in-law and two children. Sworn to keep them safe, she travels to the house of an old friend…never expecting to meet a dragon shifter who claims she is his mate.  Amber doesn’t have time to deal with being anyone’s mate. Not when her brother’s family is in danger.

However, meeting Kelos is a blessing in disguise, literally, since he swears to protect them with his life. Not that she wants him to die any time soon.  Especially not when she’s already falling in love with him. Who wouldn’t? He’s handsome, strong, and has a primal need to protect her.

His treasure is not so bad either!  But he says he’d give it all up for her. Now that’s how to win a woman’s heart.

Titles in the Spring – Shifter Seasons series include – Kelos –

(in my way of keeping track of series/spin-off series this Shifter Season series is broken down by season — although it seems that the book numbers are continuing chronologically – in any event, they are amazing series that definitely connect)

We’ve run into Kelos before, particularly around the sawmill where there is a carved statue of him or rather his dragon.  So I have been waiting for his story to be fully told – and what a story it is.  Kelos had made the decision to set down roots in Bear Creek, something he’d not done before as he was a wandering soul.  But it was time, it felt right, and it turns out buying that fixer-upper cabin was exactly what would be needed when his mate and her family appeared in his life.

Amber is desperate to protect her sister-in-law, niece, and nephew from the trouble that is following her brother ever since he agreed to be a witness against one dangerous criminal.  She may have arrived in town looking for an old friend, what she found, in addition, was a man who claims to be her mate, one who will do anything to protect her and her family.  She doesn’t really have time to deal with romantic notions, although she is aware of shifters and knows exactly what ‘mate’ means – yet, somehow Kelos ends up providing shelter, a safe hiding place, and she’s falling for him even if the timing is off.

I enjoyed ‘Kelos‘, it’s an excellent start to the ‘Spring‘ part of the ‘Shifter Seasons‘ series.  Their romance is full of sizzling chemistry, one sister-in-law that I’d be tempted to smack upside the head on several occasions, dangerous situations, and characters who will probably make more appearances as this series continues (at least, I’m hoping they do).  I love the ‘seasoned shifter’ stories, those that have waited far, far too long to find their mates.  So to say that I had a blast with this story would be an understatement.  If you love anything Paranormal or Shifter Romance related then you’d enjoy stepping into this world.