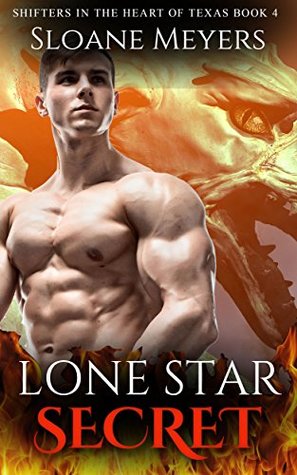 THIS is what I’ve been waiting for.  Bloodthirsty much?  No, it’s not that – but there was a pattern of focusing on the human romance of all these couples finding each other and very light on the Shifter side of key players… plus small hints along the way that there was more to the overall story.  Now, in Lone Star Secret it’s revealed why the main characters needed to find their life-mates before the Shifter side of their stories could come out full force.  I “felt” there was more to come, based on Ms Meyers’ past series and I certainly am glad that now we have reasons and some answers but definitely can expect much more to come.  I am loving having one particular Shifter species included in this overall story line.  No, not going to spoil it, but it’s about time.  *grin*

As someone who has  a love affair going on with books myself, I can definitely identify with Drake and Kaiya as book nerds.  They felt completely natural together, and Kaiya’s anger at being left out of some things rang so very true.  Not every relationship is going to move smoothly along, there will be arguments and fights – it’s how the couple sticks together in spite of messing up, making mistakes or simply being too protective that really define the depth of the love they have.

We are introduced to two new characters, Levi and Griffin, who will play a larger role later on in this series.  But they definitely had their place in this story that makes them important to the outcome.

The only thing I missed in Lone Star Secret was the exclusion of Max.  He’s mentioned, and all the brothers are brought in to this story and have their parts to play.  Max is not a blood brother, but he’s been thought of as being as close as a brother throughout the earlier stories.  I “get” that he isn’t blood relative to the mystery being unfolded, I do.  I simply wish he would have had at least a small part beyond mentioning that he and Cassie were present in some ways.  But that’s a totally personal opinion that has nothing to bear on the story at all.

I really enjoyed this story, it’s the one I’d been waiting for that brought the Shifter world into play.  It appears that there is trouble brewing and our couples need to get themselves prepared.  And we haven’t met everyone yet.  So there is a lot to look forward to in the next story.