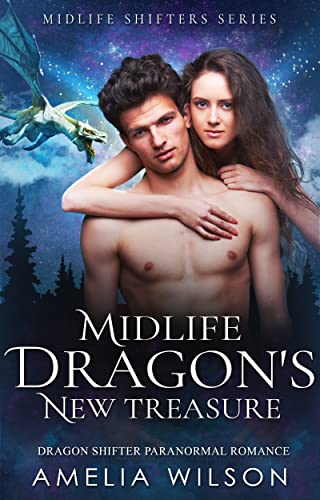 HEATHER
It takes everything I’ve got just to keep things together.  Just to make it through the day.  The thought of losing my job is terrifying, and visions of me and the kids on the streets are worse!

But then this man… He could have my job.  He could demand they fire me.  It wouldn’t matter if I did what I was accused of or not.  He could fire me and instead he wants to help me.

One accusatory hotel manager is about to unwittingly change the lives of two people when he mistakenly believes that a hotel maid must have stolen a very expensive watch that a guest has declared missing.  She’s innocent of the theft yet what is in real danger of being stolen is Romero’s dragon heart.  She’s about to enter into an adventure that will spin her world upside down into an unexpected future as one sexy, wealthy dragon shifter’s mate in Midlife Dragon’s New Treasure.

I had fun with Heather and Romero’s sexy romance.  It’s a quick read, a whirlwind courtship filled with sizzling, steamy moments and the discovery of a dragon shifter’s mate.  I enjoyed the bits of slightly different shifter lore that are introduced.  I love a story that delivers emotions, gives me a few chuckles along the way and lets me escape into the magical world for a bit.  If that describes your favorite paranormal romances then Midlife Dragon’s New Treasure is perfect for you.