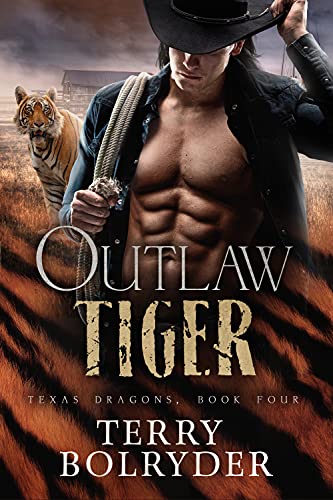 Save a horse, ride an outlaw tiger…

As an orphan raised on Dragonclaw ranch, Dallas the tiger shifter is completely loyal to all the people and shifters who live there. So when a local story about gigantic monsters emerging from the ground draws unwanted attention, Dallas swears he’ll protect his home and its secrets at all costs. As one of the smartest, strongest creatures on earth, it should be simple. That is, until he meets feisty, sweet Mel, the reporter getting closest to the truth, and the beast inside Dallas growls to claim the woman he knows is his.

Mel is chasing her big break, seeking to expose literal monsters to the world. When her cameraman screws up and leaves her in danger, she winds up saved by a shadowy man in a cowboy hat, who also shows up the next day to save her again. The huge, silent man intrigues her, even as he insists on staying nearby. But as Mel explores the beautiful Texas wilderness with Dallas, she can’t help getting dangerously close to the gorgeous man helping her, and ever more interested in what he’s hiding behind those amber eyes…

As Dallas tries to protect those closest to him, his heart is pulled in two directions. His tiger has made it clear: the human is his. But Mel is getting closer to the truth, along with several other dangerous parties. And Dallas might just have to choose between his home and secrets, and the woman he now desperately loves.

Outlaw Tiger is the fourth title in the Texas Dragons series with a couple that seems about as opposite as it’s possible to get – one more deadly silent type, one brash, non-stop talker.  Yeah, an interesting combination of mates there.

I’m not going to quibble about my reactions to characters right now.  I adored, have loved Dallas since first meeting him at the start of this series, and couldn’t wait to get his story in my hands.  Mel.  No, just no, could not stand her even when she somewhat “reformed” herself once she knew about Dallas and crew.  It’s unfortunate, but her attitude, her carelessness with secrets and her own safety, how she was willing to continue on even knowing, finally, what was going on.  Her drive to succeed at any cost simply drove me away as fast as a wildfire.  But.  That’s my reaction to Mel, there may be readers who adore her style and personality.  For that reason, and that it’s not fair to take stars off of a review because I didn’t like one of the main characters, Outlaw Tiger, does deserve the 4.5 stars I gave it as it certainly is an action-packed, sizzling with sexual chemistry, and secrets, lots of secrets story.

There are a few twists in Dallas’ story that will reveal some parts of the concluding story in this series, Rogue Wolf, while still leaving enough information unknown to make that final story amazing.  I enjoyed the glimpses of the “brotherhood” that these shifters have developed over time, each is unique and I’ve loved getting to know them and their mates.  There are heartbreaking moments as well as we learn just how Dallas came to be at the ranch.  And we get a bit more about those underground monsters… who just might not be as we’ve been thinking as true monsters.

I enjoyed my time back in this world and would recommend Outlaw Tiger and the Texas Dragons series to any reader who loves Paranormal Romance, intense storylines, some laughter, some tears, and a whole lot of action.

Available for the Kindle (in Kindle Unlimited as well)