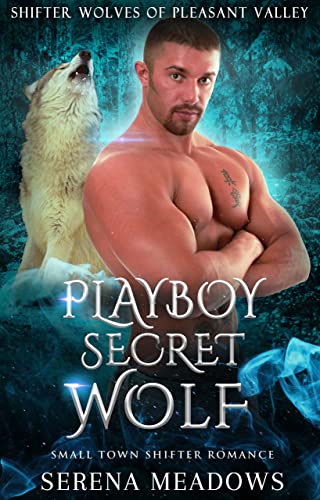 I was the wolf shifter that thought he had everything… until Nora Simons entered my life and turned it upside down.

My life was perfect.  But Nora showed me what I was missing – a sassy woman on the hunt for wolves.  Her mission to find them would remove our grazing rights.

Nora could never find out that I was a wolf shifter.  And she was not interested in me at first…  But that changed when I touched her skin, making her realize that she belonged only in my arms.

But my pretty Nora came with a set of problems I had to deal with.  Including her ex that was obsessed with her.  That combined with my own enemy who was a rival clan leader, would keep me busy for a while.

No danger was too big for me.  But keeping Nora safe was important.  In fact, it was the only important thing.

How would she react after watching me shift to save her life?

Playboy Secret Wolf continues the Shifter Wolves of Pleasant Valley series with the town’s mayor, Paul, a bit of a player, never interested in settling down, certainly not an outdoorsman even considering he’s a wolf shifter and a rather entitled son of wealthy parents… he’s not a “bad” guy he’s just got a flirty attitude that’s going to get him in trouble real fast when he meets the woman from the forest service who is in town investigating wolf sightings that will destroy his community if proven… and who happens to be his fated mate.  Yeah, life just got real for Mr. Mayor.

I had fun with Playboy Secret Wolf.  Nora is simply over men like Paul when they first met.  And she’s not afraid to say so.  Watching Paul walk through minefields of his own making with this woman was definitely entertaining.  I liked Paul, but yeah, at first he was rather insufferable in his attitude toward Nora.  Although to be fair, Nora herself was a bit blind when obvious clues were right in front of her.  It’s easy to set uncomfortable feelings aside when it’s someone you “know” rather than a stranger.

We’ll get some short glimpses of earlier couples who already found their happiness, uncover some nasty actions on the enemy’s part, watch two people find that middle ground where each changes their attitude just enough to let love in, and some sizzling chemistry that is off the charts.  If that’s the type of Paranormal Romance you enjoy Playboy Secret Wolf then is simply perfect for you.  The glimpse we get of the next story in this series has me intrigued and I’ll be watching for Rescued by the Secret Wolf to release.