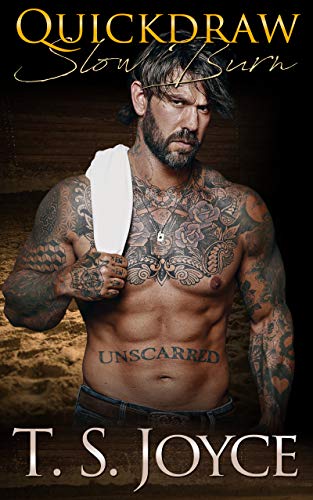 Bucking bull shifter, Quickdraw Slow Burn has had one focus, and one focus alone—winning that coveted title of number one bull in the world at the final Battle of the Bulls event. He’s trained relentlessly for this day, but he’s been drawn into a small herd of other monstrous bull shifters and is figuring out that he doesn’t have to celebrate his successes, or mourn his losses, alone anymore. When he meets Annabelle Faulk at a rodeo, she doesn’t look so intimidating, but she’s got one gnarly wolf residing inside of her. Maybe that’s part of the attraction. Quickdraw has tried and failed to find a match before, but this time is different. One unexpected night with her has him hooked, addicted, and bewitched. But when she finally accepts the plane tickets he’s been sending her to meet up again, she isn’t the same woman he met a month ago. Something has changed in her, and Annabelle’s reserve around him is confusing. It’s messing with his head, right before the biggest bucking event of his life. Annabelle has a big secret; he just can’t figure out what it is.

Annabelle Faulk is in big trouble. Something unexpected has happened to her that will change the course of her life forever. There’s a man she can’t stop thinking about in Quickdraw, but she is hyper-aware of how she could alter his life as well, and it has the potential to kill his career. When she finally goes to confront him, he doesn’t make it easy to cut ties. In fact, he’s caring toward her, and protective, and all the things she and her wolf have always wanted in a mate. It’s really hard to say a necessary goodbye when goodbye is the last thing on earth she wants to do. Caught between a rock and a hard place, she is now growing that protective instinct to keep him safe from what’s happening. Someone is poisoning the bulls, and Quickdraw is the number one target. No matter what their future holds, Annabelle and Quickdraw have to keep each other alive…no matter what.

Quickdraw Slow Burn is the third title in the Battle of the Bulls series, and this time we’re going to get more suspense as the stakes are higher, the danger more real in Quickdraw’s and Annabelle’s story.  While each story is complete in itself (the main characters getting their HEA), I would still strongly suggest reading this series in order for it does, in so many ways, build on what happened previously – plus they are all amazing stories to see unfold.

When we left Raven’s and Dead’s story in Dead of Winter, we see the brief connection that Quickdraw and Annabelle make at the hospital.  Some of the action between them happens off-page, between then and where this story begins.  That is my only “I wish” moment of their story.

Quickdraw is a very straightforward acting man, he has no intention of taking a mate, having kids, making a life with one special woman… or at least that’s what he tells himself and Annabelle when they reunite.  Trouble is everything about how Quickdraw acts around and thinks about Annabelle screams “mate” but he’s stubborn yet always tells her exactly how he feels, there’s no fluff, no false promises here.  Annabelle has to make a life-changing decision soon and Quickdraw certainly isn’t making that choice easy for her.

The underlying danger to all of the bull shifters is ramping up, becoming more dangerous, more deadly.  Annabelle will find herself right in the middle of trying to keep Quickdraw and the others safe as they set a plan in motion.

Quickdraw Slow Burn is intense, sizzlingly sexy, and takes the danger factor up a few notches.  I had a blast back with this herd again, there’s more to come (I love when an author has an obvious stopping place to a series and then goes just a bit beyond for more of that world).   If you love a really good Shifter Romance full of bantering, shenanigans, danger, and sexiness then you’d love the Battle of the Bulls series.