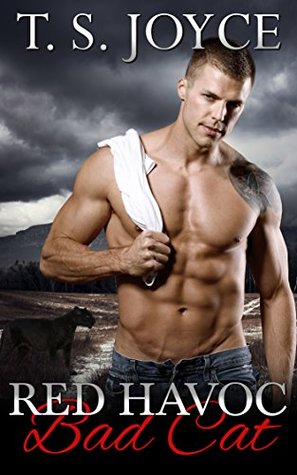 Barret Turgard is in a desperate battle to keep his broken panther steady. All he needs to coast through life, and stick with his routine—work, eat, sleep, and protect his crew. Anything extra could send his inner animal into a tailspin he can’t escape. And when a female flight shifter trespasses in Red Havoc territory, she threatens to do just that. Eden is feisty and beautiful, but she sees too much, and Barret is finding it harder and harder to hide his darkness from her and his crew. His control over his animal is slipping with every secret she pulls from him. She doesn’t know it yet…but she’s messing with a monster.

Eden Brown is in the Appalachian Mountains to help a friend, but the reclusive panther shifters there don’t allow trespassers. Barret is dangerous, and it’s clear he’s hunting her, so why isn’t she afraid of him? She isn’t made for a mate, but the closer she gets to him, she more she thinks he could be the one who changes her destiny. That is…until he finds out who she really is. Barret thinks he’s the monster, but Eden knows the truth. It’s her inner flight shifter that could bring chaos to the mountains, and war to the Red Havoc Crew.

For the past few years I have been completely invested in the ongoing connecting series that make up the Damon’s Mountains universe.  These characters have become as loved as family, crazy family at time,s but still mine.  Each story gives me someone else to love, to tuck into that huge family tree of loved characters.  And then… then comes along two characters who are so broken in different ways, who will touch my heart so deeply that I’ll truly cry and laugh out loud with them as their story unfolds.  Barret and Eden made such an amazing couple.  Barret is so badly broken that he is in danger of one day being put down by his crew’s Alpha.  He’s holding  on but by the barest of threads.  Eden has spent her life protected and somewhat afraid, always looking to the skies in fear.  They come together in an odd fashion, caring for one truly broken panther, Lynn.  She will be the catalyst that brings them the greatest pain and lead them to the most fulfilling love each could ever have hoped for.  But it won’t happen without casualties, without hurt or without enough trust to keep a thin thread still connecting them in the worst of times.

I truly believe if you have followed any of these series or now, Red Havoc Panthers, that you need to read Red Havoc Bad Cat for yourself and discover this couple without influence.  It is a purely emotional journey, and one that will ultimately bring all of these characters into a true crew.  Before they were misfits, held together by chance and desperation at times – after this story they will be united as a crew and that is an amazing thing to witness.

There is one beloved character, Beaston, who has shown up in many of the other series over time.  But his influence is strongly felt in this particular series.  Look for Beastion’s touch in Red Havoc Bad Cat… it will make you smile and love him a bit more than before.

I cannot say enough good things about this story or these connecting series.  Go and meet Barret and Eden for yourself – I believe you’ll be richly emotionally rewarded for your time.  I would highly recommend the Red Havoc Panthers series to any Paranormal Romance or Shifter Romance reader.

I read this title through my Amazon Kindle Unlimited subscription.