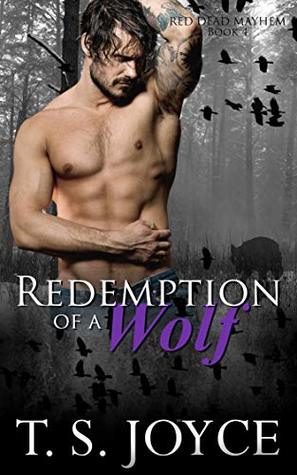 I am truly at a loss for words right now, except for what a stunning way to bring the Red Dead Mayhem series (and in a way the connecting series Outlaw Shifters) to a close.  I mean, I’m just sitting here staring at the screen trying to figure out what I could possibly say beyond – amazing freakin’ job.  I loved this wrap-up to everything we’ve encountered with these shifters of many Clans, and Redemption of a Wolf was simply the sexy, intense icing on the cake to bring everything full circle and to an ending that brought a few tears.

Stories with the intensity of plot, character development and actual emotional attachment like Redemption of a Wolf are the driving reason why I read Shifter Romance.

Kade and Trina just work together.  Yes, his wolf is an out of control beast, and her cat is strong from the difficulties of life that she’s faced – together, they are a force to be reckoned with.  Trina sees him, she really sees the man and the wolf – and neither is crazy and both are worth saving.

We get to see just about everyone, or a mention of or a glimpse of at least, that we’ve met in both the Outlaw Shifters and the Red Dead Mayhem series.  It’s touches like that, the wrapping up of loose ends, the showing of the relationships and the communities she creates that keep me coming back for more stories from T. S. Joyce constantly.

I don’t have words to tell you what an amazing, satisfying story Redemption of a Wolf is.  I’m just going to hope that if you’ve read the rest of this series that you’ll figure that out when you pick this one up.  If you haven’t discovered this series yet, I would highly recommend it – you’ll be amazed and become addicted to these crazy, out of control, sexy, intense shifters.