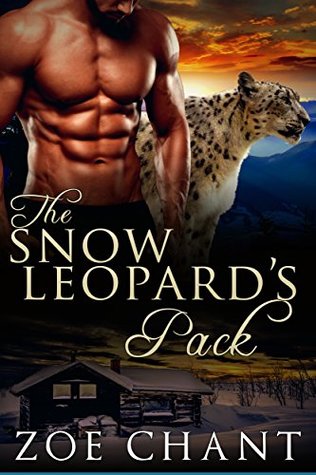 At times it seems that Zoe Chant saves the best of the series for last… I’m kinda hoping that there’s more to the Glacier Leopards series but this feels like this loosely held group of shifters and humans have come into their own true pack at last.  And that’s a good feeling.  Cal has always been a somewhat reluctant Alpha for this group.  Oh, sure, he’s the oldest, he’s their boss in their Forest Ranger jobs, and he is the one that everyone brings troubles to in order to find a solution.  Dictator Alpha?  No way, not on his watch but they call him Alpha and this ragtag group of people have formed a unit.  So when Teri’s sister is in trouble she has no  hesitation in going to Cal for  help… and brings the one woman he never thought to find right to him, his mate.

The Snow Leopard’s Pack is an intense, and a satisfying combination of a woman finally understanding her own worth and finally stepping out from under her obnoxious mother’s control, sisters finally understanding each other and accepting that their differences aren’t all that great, and one man discovering that he isn’t destined to be alone as he always thought.  It’s got a touch of danger, several chuckle out loud moments, definitely sexy times and the sense of a loosely held group coming together to truly form a bond, a pack, a family.

I completely enjoyed Lillian and Cal’s romance.  Oh sure, Lillian gave me a few “Girl, don’t be so foolish” moments, but then she’s human so I expect that at times.  *grin*  Overall, The Snow Leopard’s Pack was the cap on this series that held me captive from the start.  I don’t know if this is the end, I’ve learned to never say “the end” with Ms. Chant’s stories – but if it is, then I’m a quite satisfied, happy reader with the people and adventures I have encountered in the Glacier Leopards series.

I would recommend this story and the entire series to any Paranormal Romance or Shifter Romance reader who enjoys a touch of danger, maybe a bit of mystery, likable main characters and secondary characters who create a unique world.