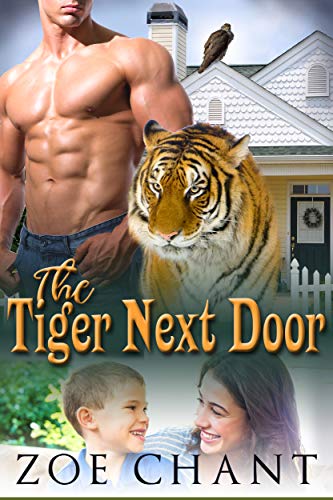 Tiger shifter and businessman, Shaun always wanted to spend more time with the child his ex-wife took away from him — but he wasn’t expecting her to abandon five-year-old Trevor and force Shaun to move to the tiny town of Green Valley.

It’s bad enough that Shaun doesn’t know the first thing about being a father — now suddenly he’s the father of an unpredictable shifter child.

Hawk shifter and preschool teacher, Andrea knows better than to fall for Trevor’s father — no matter how good he looks with a colander on his head. But the electricity between them is impossible to resist, and when the lights in his house go out, the sparks that fly aren’t only in the fuse box.

Abandoned by his mother, all that Trevor has ever asked for is love and stability, and Shaun is determined to give that to him at any cost.

Even if it means denying that the hot next-door neighbor is his destined mate.

This is an 18+ story intended for adults, it may include strong language, violence, or sexual situations geared toward an adult audience.

The Tiger Next Door adds a very real touch of life as a single parent with young Trevor’s reactions to the interest between his dad, Shaun and his friend/teacher Andrea.  Jealous?  Maybe, just a touch.  But there is more there as well, and we’ll discover Trevor’s real thoughts by the ending of this magical romance.

Both Shaun and Andrea knew, or very strongly suspected by their animal’s reactions, that they were mates early on… the trouble came as two-fold.  Trevor’s intense determination to keep the adults apart or only focused on him, and the fact that shifters aren’t out in this world so neither knew if the other person even knew about shifters, let alone was one. too.  I had a good chuckle — at myself — when at the ending I discovered Trevor’s true reasoning and I was close, but not in the way I’d thought throughout the story.  *grin*  I happen to love when an author tosses a red herring in like that, definitely made me laugh at myself.

I had read Dancing Bearfoot back when it was a single title, and I’m so glad that we got a series from that charming small town.  We’ll get to see Patricia, Lee and Clara again, and meet up with some other secondary characters that I certainly hope we see again soon.  If you’re in the mood for a feel good Shifter Romance that will engage your emotions and maybe your laughter as well, then you’re sure to enjoy The Tiger Next Door.