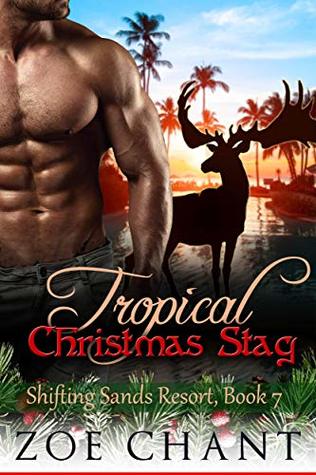 Tropical Christmas Stag is the seventh story in the Shifting Sands Resort series, and we finally get Gizelle’s story.  I’ve been waiting for this one since we first met Gizelle.  Of all the shifters who were held prisoner in the compound on the far side of this island, Gizelle is perhaps the most fragile, the most affected by her former captivity.  Her innocence is often countered by wisdom far beyond her years, and she deserves an amazing mate.  Conall is a wounded, almost bitter man when he arrives at the resort trying to escape from the Christmas madness of Boston.  Once upon a time he loved this season with it’s beautiful music and festivities – now, even his former love of the holidays has been stolen from him just as his hearing was.  For a professional musician, a creator of the  most beautiful notes the loss of those sounds has had a deep impact on Conall.  His plan to escape to the tropical sands of this shifter resort brings him so much more than he ever expected… it brings him Gizelle, his mate.

I knew that Gizelle’s story would be emotional, after all she has much to put at risk, even for the love and security of a mate.  Yet, Tropical Christmas Stag is crafted in the most loving, understanding way, full of innocence, laughter, miscommunications, and at times complete awe at what is happening between Conall and Gizelle.  You will laugh and cry, get annoyed and furious (do not get me started on Conall’s mother), and in the end be stunned by a love so brave and so accepting that you will think about this story beyond the final page.  There is also danger in this story, hints of what is to come and I’m definitely on edge to start discovering who is really pulling the strings and endangering this island.

High praise for Tropical Christmas Stag, and a must read if you’ve visited this series before.  If you haven’t started the series, then I’d suggest going back to Tropical Tiger Spy at the beginning if you possibly can.  This series builds on events, and people known to us in this series on a somewhat isolated island and events do flow from one book to the next.  If possible, I’d suggest reading in order… but if you cannot then Tropical Christmas Stag is a delightful story that could be enjoyed on its own, it’s just better with background, in my opinion.  I had such fun with this tender, unique romance and would highly recommend this one.