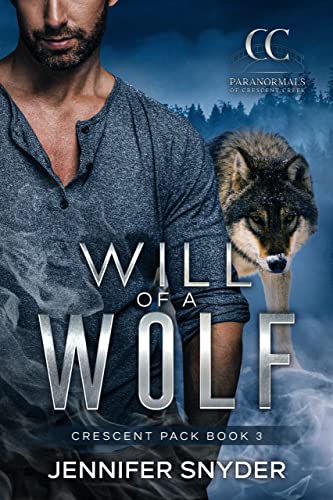 His wolf wants to protect her, but she doesn’t make it easy. Will they have a chance at love or will the danger she’s placed herself in end them both?

Tobias Hilt has been plagued by visions of a terrified woman lately, one his wolf demands he save. It’s hard to save someone you’ve never met, though. But when the mystery woman appears at his place of employment, Tobias realizes there’s a strong pull toward her that goes beyond his wolf’s desire to protect her.

Kat Lavender heard the rumors of supernaturals living in Crescent Creek as a kid. Though she never saw any proof, she’s hoping there’s some truth to them because her sister’s life depends on it. Cancer is a beast, and time is ticking. Kat needs to find a supernatural being to cure her sister before it’s too late.

When Kat’s mission puts her in danger, Tobias steps in to help. She’s grateful for his help, but how will she feel about him once she learns his secret—that he’s what she’s been searching for all along?

Will of a Wolf is the third title in the Crescent Pack series and this time a most unusual fated mate is about to make an appearance but will she be able to accept what she only suspects?

Kat and her sister have returned to Crescent Creek, a place where they visited often as children.  But Kat has an agenda now, she’s heard the rumors, and even felt something strange in the air yet now saving her sister’s life from cancer that is quickly running through her body may depend on those supernatural beings that folks talked about.  Kat may have good intentions but she’s going about this search in a way that will only open her up to incredible danger because what she thinks she knows is just enough to get her into grave danger.

I don’t want to get too deeply into Will of a Wolf here for there are things you should come across naturally as you read it, but I didn’t put this one down until I came to the final page.  It’s so emotional on many levels.  Yes, it’s sexy and sizzling and even dangerous with some vile thugs out to harm others.  But mostly it’s an emotional journey to acceptance for one sister, and that is not an easy trip for anyone to take.  Tobias will protect his mate, but while he might be able to do as she wishes is it the right thing to do?  Frankly, this one was hard because I could see all three sides and there was going to be heartache in any one of those choices.

I’m loving the Crescent Pack series and Kat and Tobias were an excellent addition to this overall storyline.  Blood of a Wolf is up next, and while it will be a bittersweet read for me it’s also one I’m looking forward to.

If you love a well-written, thoughtful, action-packed, sizzling romance with believable folks in heartbreaking situations, then this one is perfect for you.