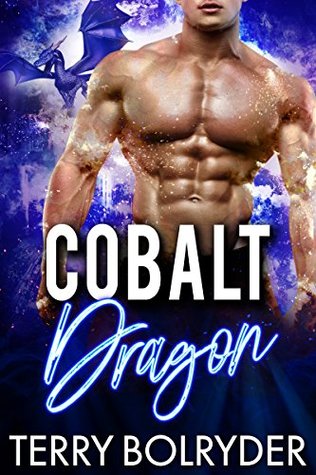 The Cobalt dragon is ready for a mate. At least, the bookish intellectual thinks he is. But when he and his crew are sent on a mission to rescue another dragon heart, only to find that she’s already rescued herself, Cobalt will find that fate has someone much different than what he had in mind.

Sylvie has always been a fighter. And not even wolves or wyverns can stop her from taking back her freedom. But maybe a towering, brilliant nerd of a dragon with muscles for days and a heart of gold can make her reconsider going back to the human world for a few days. After all, how bad could being in a giant mansion full of hotties be?

To Cobalt’s shock, fate moves faster than he could have anticipated, sparking sizzling sexual chemistry between him and Sylvie. But there are problems that will take more heart than brains to solve, and Sylvie’s unfinished business is lurking in the shadows at every turn.

Cobalt has been my favorite dragon in the Dragon Guards of Drakkaris series.  I know I shouldn’t play favorites but this logical, nerdy yet lethal dragon has always reminded me of my favorite Vulcan, and his bookish, logical Spock-ish ways have always given me a chuckle and a smile.  Cobalt is paired with a sassy, feisty fighter who didn’t need rescuing but does need to believe in herself and that she’s worthy of being loved forever.  Sylvie is a dragon heart for her brave actions and just like the others has been captured for those qualities.  Her cunning in finding a way out of the facility where Hora has been planning and executing her horrid plans shows her determination.  But within the heart of this fighter also lies a young woman’s fears of her past, and to get Sylvie to trust not only Cobalt but herself is going to be a challenge.

I enjoyed this couple very much, as well as the chance to get to know Chromium better.  There is obvious danger here, steamy secy moments and a few surprises as well.  Of all the stories in this series Cobalt Dragon has made me more curious as to what is ahead in the next story… and beyond.  If you love watching a nerd turn into a prince, or if a tough, sassy human who is stronger than she thinks are your kind of couple then you’d enjoy not only Cobalt Dragon but this entire series.  I’d definitely recommend this story and this series to any Paranormal Romance or Shifter Romance reader.