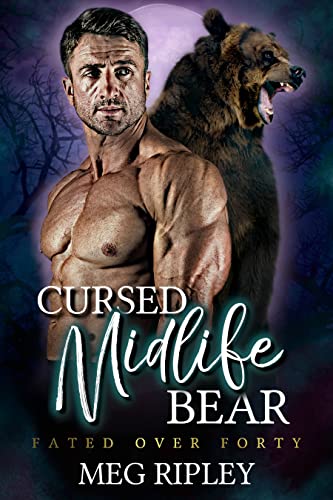 When I turned 40, getting divorced was nowhere on my radar.
Neither was getting pregnant with a cursed bear shifter’s baby.

Have a divorce party, they said. It’ll be fun, they said.
It was until I ended up in handcuffs.
A group of Karens rained on my parade at the winery
And in my drunken haze, I mooned every last one of them—
Along with the responding officer called in to arrest my ass.
Not a good look for a teacher starting off in a new little town.
When he cuffed me, I stumbled into his rock-hard body,
But he softened up once he brought me down to the station,
Taking pity on me and caring for me throughout the night.
The charges were dropped the next morning,
So he gave me a ride home, and I offered him breakfast.
But Landon was hungry for me and jumped right to dessert.
Fast forward to now, when I find out I’m pregnant at 40,
But the fun doesn’t end there.
Apparently, Landon’s part bear.
Oh, and his family? Yeah, they’ve been cursed for generations.
Now my unborn child could turn out to be a feral beast—
Just like Landon’s brother, who’s now on the hunt for me.

I had such a good time with Cursed Midlife Bear, part of the Shifter Nation: Fated Over Forty series.  Bring together a wee bit of over-imbibing at your divorce party held at a nearby winery, a couple of true Karens, one hot and sexy police officer who just happens to be a bear shifter who isn’t quite ready to admit that he’s discovered his mate, and let the fun times roll.

Landon and Michelle have a uniquely difficult time dealing with each other when Landon keeps making mistakes, Michelle continues to view his actions as though he were her ex-husband incarnate, and one generational curse rears its extremely ugly head.  Watching them work their way through the wariness and the just plain bad timing was quite the adventure.  I had fun with this couple, as I have with all the couples I’ve met in this series.  If you love a solid, emotional, sexy, and entertaining story then you’ll feel right at home in Cursed Midlife Bear.

*I received an e-ARC of this novel from the author or author’s team via Booksprout. The opinions expressed in this review are my own.*