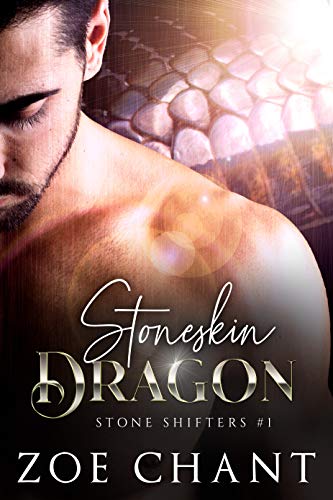 He has days to live.

Dragon shifter Reive is dying. After a fight with a gargoyle to save his clan, his poisoned body is painfully turning to stone. His only hope: an ancient book that promises a cure.

And the librarian who can help him find it.

All her life Jess has feared and hated her gargoyle shifter form. She would give anything to be fully human.

If she can fight her attraction for a dying man long enough to help him find the book that will save or doom them both.

But they’re not the only ones looking for it …

Titles in the Stone Shifters series include – Stoneskin Dragon –

I happen to love when a favorite series of mine produces a spin-off series, it just allows me to stay somewhat in a world that I’ve enjoyed.  Usually, while I’ll suggest reading any series in order this time I feel the need to mention that what happened to Reive that has him on this search for an ancient book actually took place in Dancer Dragon of the Bodyguard Shifters series.  If you have not yet read Dancer Dragon that’s not a problem for anything you need to know is told in Stoneskin Dragon.  But, if like me, you like to know the background details then that is where you will find what you seek.  (I only realized that I had missed a book after I started reading Reive’s and Jess’s story and it didn’t affect my enjoyment a bit… only made me go back sooner to the book I missed)

Reive is dying, his body slowly but steadily turning into stone patch by small patch.  Bitten by a gargoyle during battle now has him dying or even worse, changing into something unknown.  He is out to find answers before it’s too late, and the only clues he has have sent him searching for a book.  As he stands outside of the library when Jess works he has no clue that not only answers but his mate are within… and it’s not going to be easy to accomplish his goals while discovering he has far more to live for now than he did yesterday.

Jess believes herself to be a monster.  Even as a young orphan, she’s always known that she had to keep a part of herself hidden from the world.  Now, as an adult with growing knowledge of what she is Jess is even more determined to find any way possible to be completely human.  Her love and need for books that will uncover that knowledge makes her the perfect librarian.  She’s collected quite a few old books by now, some her own others for the small library where she works.  She never expected her life’s work to bring the perfect man for her right to her doorstep, or to discover that fate often works in odd ways when an entire world she had no clue of opens up for her.

Stoneskin Dragon is a roller coaster of a ride with danger, laughter, frustration, tears, and discovery all mixed into a story that kept me glued to the pages far beyond when I should have been asleep.  Reive and Jess are characters with strength, and not only physical, determination, stubbornness at times, and sizzling chemistry that both hesitate to engage.  They’ll find answers, but not all of them at once as they battle enemies and travel great distances to learn how to save Reive and each other in the process.  I enjoyed this one so much and I find myself constantly checking to see when the next book will release.