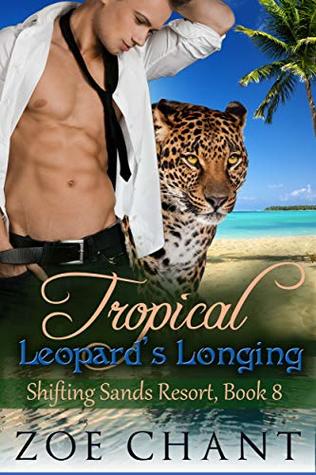 Her marriage of convenience isn’t as convenient as she hoped…

Snow leopard shifter and heiress Darla Grant thought that marrying her best friend would be the solution to all of her problems: it would shelter her from a persistent and unwelcome suitor, unlock her inheritance to save the bankrupt shifter retirement home where she volunteers, and free her from her controlling society mother.

Then she meets her fated mate at the tropical luxury resort reserved for her wedding, and her perfect plan turns into perfect torture.

Leopard shifter and waiter Breck is everything her mother despises: poor, common, and openly bisexual. No matter that he’s also charming, funny, and kind—even if Darla could switch grooms, her mother would never give her blessing to the match and the suitor she was trying to escape isn’t going to give up her fortune without a fight.

But there’s more to Breck than a ready smile and thoughtful service.

And he’s always been up for a challenge…

Over the course of a longer series, now eight titles in, you’ll get a feel for all of the secondary characters knowing that one day they will have their unique story told.  We’ve seen Breck in many of the Shifting Sands Resort stories as a delightful secondary character – now we get to peel back the layers and see what type of man… or whar leopard lies beneath.  TROPICAL LEOPARD’S LONGING will bring two people together who never, ever expected to find their fated mates at either the worst moment possible – or the perfect time to forge their future, together.

Darla is the last of a proud line of dragons -although, she herself, is a leopard.  She has been raised in unbelievable wealth by a mother who is the equivalent and beyond of poor Cinderella’s step-mother (in fact, she makes that old hag seem like a rather nice old lady).  Position, wealth and power are all that Darla’s mother understands or cares about.  She is pushing a suitor toward Darla that she will never marry for he is arrogant, mean-hearted and wants only control of her hoard.  Yet she must marry now, so she makes a plan with her best friend, a dragon and the man who runs the shifter retirement home where she volunteers.  They will marry, for convenience, she will have her freedom and her hoard at her control and Liam will have the endangered shifter retirement home in a better position for the future.  They each win, even if they both lose their freedom along the way.  The plan was going well… until their arrival at the Shifting Sands Resort for the wedding where Darla finally encountered her fated mate… Breck.  There were no options, she had to follow through with the arranged marriage for several valid reasons …somehow Breck had to find an answer before the love of his life was ripped away from him forever.

Over the years I have read about many villains.  I’ve come to realize that the absolute worst villains are women.  Yes, I know I shouldn’t say that politically incorrect and all that… yet it is true in fiction.  Women fight dirtier than any man ever will  They fight with weapons that few men understand, and they often win because of it.  Darla’s mother is the worst piece of crap to be scraped off of a shoe I have ever encountered.  She has no morals, she thinks only ever about herself, her needs, her wants, she’s bigoted, she’s out of control and does nothing to rein herself in.  She will destroy her daughter and anything she holds dear if she does not follow through on her mother’s instructions for this wedding.  I loathed and despised this woman and that never, ever changed.  But she is a force to be reckoned with, in her own small world at least.

I loved seeing another serious side to Breck.  He’s always the charmer, the man who will do anything to brighten someone’s day or have their back in a fight.  The pain that he and Darla go through is truly heartbreaking.  Which simply made the ending all the more fantastic.  Loved seeing so many of my book friends from the Shifting Sands Resort series.  Their wise words and comical reactions made my day many times.

You will love the ending to TROPICAL LEOPARD’S LONGING.  It’s perfect as it’s possible to get.  I loved every moment spent in this world once again – and I’m really looking forward to the next one with only the tidbit I read at the ending of this story.  If you enjoy a good solid Shifter Romance then I’d definitely recommend this story or any from this series.  You will be engaged and delighted.