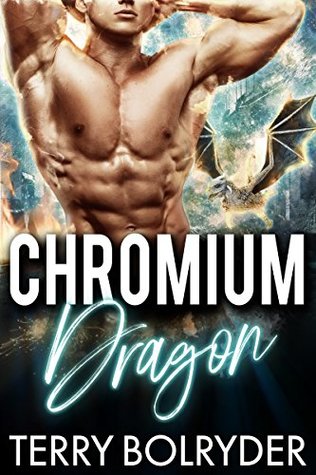 Chromium, the last unmated dragon guard and former royal bodyguard of the Drakkaris court, has a secret. He’s been sneaking out at night to serve vigilante justice and taste new things in the human world. When he runs across a curvy restaurant owner with a sweet personality and a lasagna to die for, he knows he has found his mate. Now he just has to stay in her world long enough to protect her from those who want to hurt her.

Helen hasn’t had a lot of easy breaks in life, but she works hard to help anyone she can. When a mysterious, hot customer stops her restaurant from being robbed, she’s happy to offer him a place to stay, even if she doesn’t know anything about him. Well, except that he’s tall, with Caribbean blue eyes and a warrior’s bearing, and seems utterly intent on winning her heart.

As Chromium fights to keep his secret from his friends, he is realizing more and more that he can’t bear even a moment away from Helen’s side. All he wants to do is pleasure her, love her, and show her who she belongs to. But Helen has secrets as well, and a past that may just be coming back to hurt her, if Chromium doesn’t watch out

Chromium Dragon brings the Dragon Guard of Drakkaris to a close – and what a satisfying finale it is.  As the last unmated dragon, Chromium has taken to slipping out of the mansion late at night and roaming the streets helping where he can when a human is in danger or simply doing what he loves most – searching out the amazing human foods.  To that end he’s been spending a lot of time at a little restaurant that serves a mind blowing lasagna that he cannot recreate.  And perhaps the owner, Helen, has also drawn him in with her charm and curves.  On this night Chromium and Helen’s worlds are about to change as danger approaches and one dragon warrior steps in to protect the woman he suspects is his mate.

Helen doesn’t trust easily, not after her nasty piece of trash ex-husband destroyed her self-esteem, her belief in herself.  Chromium is changing that, slowly, steadily as this dragon warrior learns how to deal with his human mate who has no idea that dragons truly do exist.  In the midst of danger, Chromium will forget to mention one important fact to Helen, one thing that may cost him his mate.  He has to step back and trust that Helen really knows his heart, not an easy feat for a warrior without fear.  No, he fears only one thing.  Life without Helen at his side.

I loved the subtle twists in Chromium Dragon.  Watching Helen begin to believe in herself, to see herself through Chromium’s eyes was a delight.  Keep an eye out for Nathan.  That’s all I’m going to say.

I’ve completely enjoyed my time with these brave dragon warriors as they battled, fought the internal fight against their metal’s poison, found their mates and eventually earned their happy ending.  I’m going to miss them greatly.  But… I’m also excited to discover what Ms. Bolryder brings us next.  We get a tiny hint… and now I really want to know more, but I’m a patient reader (kinda).  I would recommend Chromium Dragon and this entire series (along with the previous connecting series) to any Paranormal Romance or Shifter Romance reader who enjoys good solid stories, likable characters, vile villains and interesting secondary characters.  I love this world and I’d strongly suggest that you get acquainted with Terry Bolryder’s shifters… soon.